Reprinted from The Hollywood Reporter by Katie Kilkenny on February 19, 2021.

“As you develop the agenda for the Senate Committee on Banking, Housing, and Urban Affairs for this year, the film, TV, and sports industries respectfully request that you address the broad economic impact that the withdrawal of pandemic risk coverage has created for our businesses,” a group of film, television and sports groups (including The Motion Picture Association, the Independent Film & Television Alliance, the NCTA – The Internet & Television Association, the Directors Guild of America, the National Association of Broadcasters, IATSE, the Producers Guild of America, American Coalition for Independent Content Production and SAG-AFTRA) stated in a letter addressed to Senate leaders on Friday. “Simply put, it is enormously challenging for us to go back to work absent pandemic insurance coverage.”

RELATED POSTS:  Nocera: Unions are Back in Favor, and They Need to Seize the Moment

About Jeffrey Burman 634 Articles
Jeff Burman served on the Guild’s Board of Directors from 1992 to 2019. He is now retired. He can be reached at jeffrey.s.burman.57@gmail.com.

‘This is How We’re Going to Be Making Movies’: Netflix Execs Talk Amid Pandemic 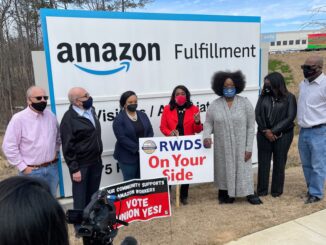