Drone warfare “is not only topical, or even controversial; it’s something that many of us are ambivalent about. We see the good and the bad, and so does this movie,” offers Oscar-winning editor Zach Staenberg, ACE (The Matrix), in discussing Good Kill, which opens May 15 from IFC Films. For an editor known primarily for heady action, it’s the most character-driven movie of his 30 plus-year career, which includes five films with the Wachowski brothers (Bound, 1996; The Matrix trilogy, 1999, 2003, 2003; and Speed Racer, 2008). Good Kill marks his third collaboration with writer-director Andrew Niccol (Lord of War, 2005; In Time, 2011).

But in Good Kill, with warfare becoming a first-person shooter video game, we enter a moral gray zone, which Staenberg enjoyed editorially. It dovetails nicely with his other two collaborations with Niccol. Indeed, both filmmakers are interested in advanced technology and the resulting disconnect from reality.

“Andrew takes events that are actually true and synthesizes them into a movie script,” the editor says. “He did this on Lord of the War, the first film we did together, about international arms dealing and how that works with the players involved. And he essentially did the same thing on Good Kill. Whenever we start a movie, he shows me all this research he’s done — articles, YouTube material, etc. And everything in Good Kill is fact-based and reworked into the service of a dramatic narrative.”

To Staenberg, this is what gives the movie its dramatic power. “It presents, from one man’s personal anguish, the whole moral complexity of drone warfare,” he adds.” What does it mean to be able to make a decision from 7,000 miles away to kill someone you really can’t see? Whether it’s in Afghanistan or Yemen — wherever they’re bombing that day in the movie — the audience sees it from the drone’s camera; we never get on the ground ourselves.” 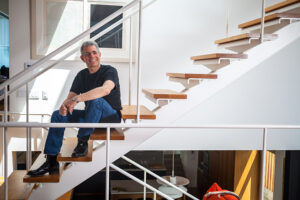 Ethan Hawke plays Air Force Major Tommy Egan, who’s in charge of directing drone strikes against the Taliban from the safety of a Ground Control Station (CGS) trailer outside of Las Vegas. Egan used to live to fly, but now spends eight hours each day fighting the War on Terror by remote control — and the remaining time at his suburban home, where he feuds with his wife (January Jones) and numbs his boredom, rage and guilt with vodka. When Egan and his crew are told to start taking orders directly from the CIA, which selects its targets based on patterns of activity rather than direct, on-the-ground intelligence, he becomes emotionally disconnected from everything, finally reaching a breaking point.

“It’s wonderful that a guy doesn’t have to get in a plane and risk being shot down,” Staenberg says. “People don’t want to see the body bags coming home. But it’s a very complex issue. By its very existence, this is a left-leaning film, but it tries to look at the issue very carefully. Tommy is conflicted because he no longer has his ‘skin in the game.’ And one of the things I personally like about it is that he makes a personal decision. I think that’s where most changes in society come from.”

However, working on an under-$9 million indie with only 26 days from start to finish certainly has its editorial challenges. This was a far cry from Staenberg’s last film, the $110-million Ender’s Game (2013) for writer-director Gavin Hood. But he found it uniquely stimulating working at the Avid alongside a capable new assistant, Stewart McAlpine. (Tony Vacigalupi, the assistant on his previous two movies, was unavailable because he was working on the Ender’s Game sequel, Divergent.)

“More and more, the films getting made that are truly interesting tend to be the smaller movies,” Staenberg states, “and I’m glad that I’m at a point in my career where I can be flexible enough to take those movies because they really provide me with fulfillment everyday going to work.”

Good Kill tells a number of stories at once and interweaves them. “We’re looking at Tommy’s home life and work life, and one of the conceits in the script is that both are set in similar environments,” Staenberg explains. “Andrew shot many establishing and traveling shots of Vegas from a bird’s eye view, which is very similar to what we see from the drone’s point of view in Afghanistan and Yemen. Both environments are located in deserts and have some eerie physical similarities.

“It’s interesting to contrast the two environments because it makes us understand that we are also vulnerable to the same kind of drone warfare in which we are engaging,” he continues. “In addition to that, there are stories within Yemen that we only learn from the screens in the GCS trailer, an 8-by-30-foot metal box. And what’s happening on those screens really determines the work day of the GCS crew.”

But then there’s a pivotal scene where there’s collateral damage and two children are killed. “That makes the drone pilots — and us — start to question the whole idea of what they’re doing,” Staenberg reflects.

The way they approached Good Kill, Niccol and director of photography Amir Mokri, ASC, went to Morocco for about a week during pre-production and shot what would become plates for use in the GCS trailer, as per the script. For the scene when the arms dump is blown up, they found a building and shot it using helicopters and cranes in a way that it could be manipulated in post and put on screen as the drone’s point of view.

Meanwhile, Staenberg spent about two weeks in pre- production doing a very rough cut just of that material. “We put in a few stock explosions I got off the Internet,” he says. “But we had no shots of the actors, so I cut the scenes like we were there. And Andrew used those on the set to work with the actors to achieve the performances we have in the movie.”

Then Staenberg completely re-worked this template once he commenced his actual edit. Interestingly, though, the experience on Good Kill reminded him of one of his favorite movies — Das Boot — because of the sense of claustrophobia and the mounting tension the filmmakers were trying to capture.

“One of the challenges was how to handle those GCS scenes — having the actors interact with the screens,” Staenberg recalls. “These are actual scenes in the GCS trailers that show the pilots and operators what the drone is seeing. I had a lot of over-the-shoulder shots and others that grounded you in the location. But then more and more as we went through passes in the movie, Andrew and I started having philosophical conversations about how we wanted to handle these shots. So I started making them more full-screen because we found that this perspective puts you better inside the heads of Tommy and the other characters.”

An important editorial challenge, however, pertained to creating a character arc out of Hawke’s minimalistic performance. His conflicted protagonist internalizes everything. “I didn’t really talk to him much, but I think through research we discovered that this is the culture of the Air Force, the culture of pilots,” the editor reveals. “They value a cool mind and a steady hand; they’re not overly reactive. So we as filmmakers were trying to get a further insight behind that cool mask. And that cool mask feels very real to me — but getting a peek behind it is very interesting and emotional.”

However, in finding that arc, Staenberg found himself juggling scenes around more than on any other film he’s edited. That’s because he was searching for greater fluidity cutting back and forth between the two worlds and trying to avoid repetition, particularly during the tense scenes with the family. 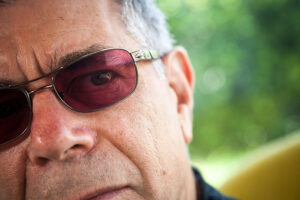 “For me, rearranging and/or losing some of those family scenes created overall an emotional effect that mirrored the way Tommy feels trapped,” Staenberg explains. “It begins to feel like we’re walking through a dream or a nightmare — an alcoholic haze for Tommy.
Like most editors, though, Staenberg usually looks for ways to shorten moments. But in the GCS scenes where they drop bombs, they always announce the amount of time until impact (between five and 10 seconds). And he quickly realized it was very effective to play that out in real time. But first he had to convince Niccol. Fortunately, he could point to a positive response at festival and test screenings.

“It was a realism thing that I discovered for myself on a gut level that we needed to do,” he relates. “It’s really counter to what I and most editors typically do. It turned out to be a very effective technique that test screening audiences really appreciated.”

One of the most disconcerting moments occurs when the drone unit witnesses the rape of a woman by a terrorist. It’s uncomfortable for characters and viewers alike, especially for the lone female member of the team, played by Zoe Kravitz. But the unit chooses not to act (“He’s a bad guy; he’s just not our bad guy.”).

“In a way, it mirrors how the whole movie is set up in terms of Tommy watching events and bombing locations many thousand miles away,” Staenberg reflects. “But he’s getting affected by it in an immediate way by observing the woman who’s sitting next to him, who’s also his friend. It’s a very interesting dynamic exploring what working like this does to a person.”

Not surprisingly, Staenberg continues to be drawn to movies about the impact of technology in our lives, and the challenge of staying connected to our humanity. “Somehow, there is that connection,” he admits. “It’s funny; it’s not an accident, as they say in The Matrix. But it’s also not totally purposeful. I don’t always identify what’s going to grab me when I read a script as an editor. And sometimes I can see it more clearly years later, after all those steps I’ve taken. But, yes, that’s what interests me.

“Take The Matrix, which is commonly seen on a basic level as an action film,” he continues in conclusion. “To me, it was much more than that. And I’m very grateful to Andrew for recognizing that. I’m much more than an action guy.”

UNION MADE: From the Art House to the Cutting Room

I was on the path of the confused college looking primarily for an interesting career and secondarily for a way to earn a living. My two goals never seemed to want to co-exist. […]

he Academy of Motion Picture Arts and Sciences announced the nominations for the 2018 Academy Awards. […]