In a strong display of solidarity, a record number of Motion Picture Editors Guild members attended a Special Membership Meeting in Los Angeles on Saturday, July 21. Nearly 1,900 active members were in attendance to discuss the status of the ongoing contract negotiations between the Alliance of Motion Picture and Television Producers (AMPTP) and the International Alliance of Theatrical Stage Employees (IATSE), of which the Editors Guild is Local 700.

It was the largest member meeting of the Editors Guild in LA in its 81-year history. Members filled a banquet room at the Sheraton Universal Hotel, with an overflow room showing a video feed of the meeting. The attendance at Saturday’s meeting, combined with that at similar gatherings held on July 17 in both New York City, at the Tribeca Loft Grill for 300 members, and Marin in Northern California, at the Skywalker Ranch for 80 members, represents more than a quarter of the Guild’s 8,000 members.

“Holy shit!” exclaimed Editors Guild President Alan Heim, ACE, opening the meeting and marveling at the capacity room of over 1,200 members who rose to a resounding standing ovation. Another 680 in an overflow room applauded via closed-circuit video feed. “I am so proud of this union!

“Negotiations are at an existential crisis,” continued Heim. “This is the first time in my many years as a union member that I feel the studios are not dealing in good faith. They are denying us the same funding plan offered to the DGA, SAG and the WGA.  Why are the studios attempting to minimize our pension and health plan?”

“This is a call to come together and speak as one voice,” said Repola. “You have come together as I have always wanted and I hope the foundation we have built will continue. The AMPTP so far has refused to make any positive changes in the working conditions that affect the lives of members. Our Board of Directors has given me authorization to keep charging forward.  To have all of you here today is a message for me to keep doing that — so I will.

“People are complaining about excessive hours,” she continued. “You guys need personal and family time. We need to fix it.” The room rose to standing ovation and cheers. “You guys get this! I love you!” Repola added.

In New York on July 17, Guild members packed the Tribeca Loft Grill to overflow to listen to an address by Repola, as well as a video stream from President Heim, from Los Angeles. As in LA, the New York meeting was the largest Eastern Region gathering in memory.

Rumors had been swirling and nerves were fraying. For the first time in the history of IATSE, contract negotiations were going down to the wire and reports indicated that the bargaining parties were still very far apart. Repola presented to the New York meeting a full account of what had taken place and let everyone know where things stood. She described the proposals, the back-and-forth bargaining and our ultimate rejection of what the AMPTP wanted to do.

“The AMPTP’s proposals amount to nothing more than putting a band-aid on this problem,” Repola told the East Coast members. “If we don’t resolve this correctly we will be back in three years for the next contract negotiation — with even bigger problems. We need to fix this now.”

Comments from members in attendance were overwhelming and inspired. Picture editor Katie Ennis said, “Standing up for this negotiation means I’ll have a pension, and that contract changes contend with the digital landscape.” According to sound editor and Guild Second Vice President Louis Bertini, MPSE, “Cathy’s informative presentation alleviated the nervousness of the crowd; everyone was much more encouraged and enthusiastic after hearing her speak.”

The contract talks have been going on and off since April, and as of a second meeting in June, the AMPTP and IATSE had not yet reached an agreement to renew the current IATSE Basic Agreement, which expires at midnight, July 31, before talks broke off again. A third round of meetings is scheduled for July 24 in LA.

The industry trade papers dubbed it a “potential strike no one wants to talk about”, though that has not been the case in a significant groundswell of pro-union activity on social media. By Friday, July 20, over 3,000 Editors Guild members had joined the I Am the Union Facebook page (www.Facebook.com/groups/iamtheunion). And more than 9,200 IATSE members from all Guilds had joined the 2018 IATSE Contract Forum page (www.Facebook.com/groups/2012ContractTalk). As the web address implies, the group was started in 2012, but has seen record participation this negotiation cycle.

Several members at the LA meeting asked how they can help spread the message to other members of IATSE, and Repola encouraged them to continue to stand together, stay united and keep the dialogue going.

At the LA meeting, former Guild National Executive Director Ron Kutak encouraged members to get on the Facebook page and sign a petition that is circulating online. “The only way things get upended is by the membership,” he said.

“Social media is giving us an outlet that we haven’t had before to extend our reach to speak with other IA locals,” said Scott Jacobs, assistant editor and Board member, who is a moderator of the 2018 IATSE Contract Forum page along with Elizabeth Rosenbaum, a member of Local 44, Property Craftspersons. “We are part of a collective of 13 locals. The better educated all of us members can become, the more unified we become. This Facebook group allows us to stand together, arm-in-arm, behind IATSE. Finally our voices can be heard. It’s a new dawn of a new day.”

RELATED POSTS:  Uber and Lyft are Trying to Make an End-Run Around Unionization

Numerous postings from union members are calling out their support for the IATSE and Local leadership  indicating that they are willing to get tough with the AMPTP to make a fair deal, even if that means calling for a strike vote. Members are posting that now is the time for the membership to stand up with the IATSE, which celebrated its 125th anniversary on July 17.

Many Issues at Stake

A thicket of contract issues is being discussed, including shoring up the union health and pension plan with revenue from so-called New Media residuals, which represent the producer’s record profit in digital streaming, and safer hours, including increased turnaround time for workers to rest between shifts.

Repola’s earlier e-mail to the membership, which was leaked to Deadline.com, reported that the AMPTP was unwilling to address the issue of contributing more money to the Motion Picture Industry Pension and Health Plans (MPIPHP) to support inflation and increased costs in an adequate way. In fact, the AMPTP proposed taking away the 10% pension increase for active members that was achieved in the last round of negotiations, in addition to expecting smaller employers to take on the burden, rather than having the studios and power-player companies take on new costs.

Producers make contributions to the MPIPHP for every hour worked by union members. Another large source of funding has come from residual payments from distribution — for example, theatrical features distributed on television and DVD. However, it has become evident that these traditional forms of revenue are drying up as viewers watch content differently today via streaming.

“The existing residual streams are no longer sufficient to secure the future viability of the Motion Picture Industry Pension and Health Plan,” Repola’s e-mail said.

The last negotiation cycle for the Directors Guild of America (DGA), the Writers Guild of America (WGA) and the Screen Actors Guild (SAG-AFTRA) all focused on securing funding from New Media residuals for their unions’ benefit plans. They were successful in achieving their demands, and IATSE members are demanding the same bargain. But defying the established practice in “pattern bargaining,” the producers refusing to give the IA similar funding increases from New Media.

Union members have become empowered in their demand to share industry profits, as the landscape shifts into digital streaming distribution. While producers are reporting box office receipts at a 10-year low and lower broadcast TV ratings, the digital TV and video industry, including power players like Netflix and Amazon, is set to be worth $119.2 billion in 2022, up from $64 billion in 2017. Also media corporations have received a boon in tax breaks for film from California and New York, as well as billions in projected savings from the recent GOP corporate tax cut. In addition, the new Trump Tax Cuts are estimated to be a windfall for Hollywood, worth between $5 and $6 billion a year — monies that otherwise would have been paid in taxes.

At the LA meeting, Repola said, “The only way to fix the pension plan is by the employers putting more money into it. This notion of ‘New Media’ it’s not new anymore.”

On the 2018 IATSE Contract Forum Facebook page, literally thousands of IA members from different locals have patiently said what issues face them. One posting includes a photomontage of six union workers who lost their lives because they fell asleep at the wheel of their cars after a long shift. Others talk about wage disparities between men and women, and between makeup artists and costumers. There are many others. The civility and the solidarity are infectious.

IATSE members are communicating intensely with one another and ultimately trying to send a message of support to International President Matt Loeb, who leads the negotiations. However, the IATSE has never asked the group of Hollywood motion picture locals to call for a general strike. Judging by the pro-union mood of members at the recent meetings and social media postings, these could be different times.

President Loeb took to Twitter to post about the union’s anniversary and protest the June 27 Supreme Court decision in the Janus v. American Federation of State, County and Municipal Employees case which ruled that public sector unions may no longer require members to pay agency fees — aka membership dues.

CineMontage reported on June 10 that Loeb referred to the contract negotiations at the IATSE District 2 meeting. “We won’t be afraid to wrestle at the edge of the cliff, [but] I’m not looking for a war,” Loeb told delegates.

Next Week is Crucial

Next week will tell if union members and their leadership are prepared to engage in such a war.

Union workers on Facebook are demanding reasonable work hours to combat the trend of intense overtime in production and post-production that leads to days in excess of 16-hours. According to Repola’s e-mail, the AMPTP has proposed instituting so-called “French Hours,” which means giving up meal breaks and meal penalties. This is widely unpopular among union workers, and recently the Guild’s Membership Outreach Committee instituted a “Lunch Is Not a Luxury” social media campaign.

The business agents of the 13 Hollywood motion picture IA locals are scheduled to return to the table next week with the AMPTP for continued negotiation against the brink of a deadline. In addition to the Editors, they include the two other national locals: International Cinematographers (Local 600) and Art Directors (Local 800).

About A.J. Catoline 23 Articles
A.J. Catoline is a graduate of NYU's Tisch School of the Arts and USC's Master of Professional Writing Program, and a Board Member of the Motion Picture Editors Guild, IATSE, co-chair MPEG Publications Committee. He is a picture editor working in Los Angeles. He can be reached at ajcatoline@gmail.com 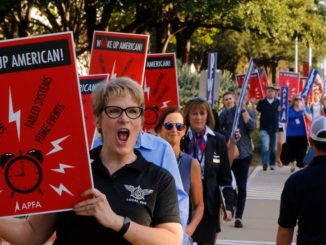 UNION MADE: Keep on Rockin’ in the Free World