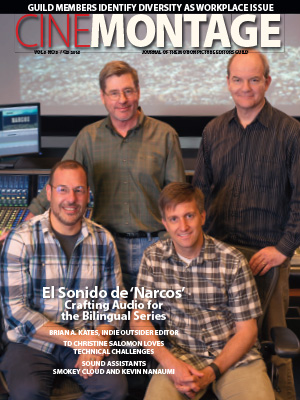 The cover of the last issue of CineMontage (Quarter 3, 2016) generated many online comments by members.  It featured a photo of the post-production sound crew of Narcos.  Above the title masthead, the banner, which is usually Guild-related (and has no relation to the cover story or photo), read: “Guild Members Identify Diversity as a Workplace Issue,” announcing the inaugural article by the MPEG Diversity Committee, created last year by the Board of Directors.

Here is what some members had to say, in comments posted on Facebook, at the Guild’s Diversity in Post Discussion Group.

“Was this cover photo choice, along with the headline along the top of the magazine, an intentional joke? Or were they really just trying to drive the point home?” wrote picture editor Catherine Haight, ACE.

She continued:  “I appreciate that this will stir conversation. It’s high time diversity be considered when cover stories, heck all stories, are created for the magazine…even if the story ends up being about the lack of diversity — which we’re working towards changing. Also, I think it’s important to know that while we all understand that there’s no ill will or intended harm, we didn’t end up at this teachable moment by happenstance: The representation of (and the lack of representation of) women and people of color (and especially women of color!) is systemic — and this issue of the magazine just pointed it out especially well.“

In its latest survey, the Hollywood Commission, an organization chaired by Anita Hill, found that gender harassment, or offensive workplace talk, is the most common type of harassment in the entertainment industry. The survey revealed […]

The HFPA was represented on a Zoom call by Shaun Harper, a diversity strategist, and attorneys from Ropes & Gray, an outside law firm. The conversation was intended as a precursor to the reveal this Thursday. It did not go well. […]

Scherker: The Forgotten Women Who Hand-Painted the First Color Films

Early cinema is often remembered as an exclusively black-and-white affair, diametrically opposed to the vibrant menagerie of colors afforded by today’s 4K television sets. But in fact, an estimated 80 percent of early films were made […]