The idea of standing while sound editing had been in my mind for many years. My initial thoughts were that it would be too hard to be on my feet all day, and I didn’t really have any idea how to do it from a practical standpoint.

I remember hearing that Walter Murch, A.C.E., CAS, MPSE, stood while editing, and that intrigued me — but not enough to do anything about it at the time. Year after year, I spent 10 hours a day (at least) sitting in my chair cutting away. Then I’d get in my car, drive home, sit down and have dinner. When I was single, I’d hit the gym, but now that I have kids, I hit the stationary bike in my house, then maybe some TV and to bed. Conservatively, I estimated that I was sitting/lying down over 21 hours a day.

More and more, I dreaded leaving work to get in my car for another nearly hour-long commute — and it wasn’t solely because of the traffic; I just didn’t want to sit anymore. My lower back and butt would get numb from sitting so long and I would often get pinched nerves in my back and neck. I would roll up towels for lumbar support in the car and, for the longest time, have had Aeron chairs with the lumbar support at work. I couldn’t shake the feeling that sitting all day just didn’t feel right, especially when I thought about doing it for the next 25 years.

A few years back, I read something that really lit a fire under me. It was an online article from Men’s Health magazine that cited a study of 17,000 people over 13 years who sit most of the day. Researchers found that you have a 54 percent greater chance of dying of a heart attack.1 While that statistic alone is pretty shocking, it was the second part of the article that really got my attention. The authors interviewed the lead researcher from the study, who said it doesn’t matter if you smoke or not, nor does it matter how much you exercise outside of your time spent sitting.2 In other words, you can’t undo all the effects of sitting all day by spending the rest of your day eating right and exercising.

Since then, I’ve read dozens of articles about the benefits of standing versus sitting at work. Many are blogs or online articles, but several are from Cornell University, Harvard Business Review, The New York Times, etc. I am not a doctor, so I can’t add any scientific backup, but I do know how it has made me feel over the last few years.

Many of us editors are pretty transient when it comes to work. While I work most of the time for one company, I do some sound editing outside of there as well. I needed something that could be easily transported from jobsite to jobsite. My portable standup desk has evolved over time; it isn’t very pretty, but I’ve been standing while working for over two years now, and I love it.

I did have some concerns when I started standing, mainly that I wanted the ability to sit down as well as stand. By the first week, I realized that I wasn’t going to be doing much sitting while working, only to take short breaks. It surprised me how quickly I acclimated to standing (basically in place). There was no real leg soreness or fatigue, except for my feet. Probably the most surprising thing was that my expensive, name-brand running shoes really made my feet sore when just standing. I tried several different types of sneakers over the next few weeks and every time I went back to the running shoes my feet were sore within an hour. For me, the best shoes are simple, flat, skateboard-type shoes without a lot of cushioning.

After spending a good year or so standing at my homemade desk, I realized I never even thought about standing; I just walked into my room and started working. Nor did I ever dread having to stand. I feel it keeps me more engaged and has helped me during my commute. Not sitting all day makes me feel that sitting down in my car is a bit of a novelty instead of just another hour of being seated.

More and more products are being designed for people to stand, so I decided to put together a professional standing desk setup. The most flexible solutions are height-adjustable desks, so you can easily switch from standing to sitting. Some of these can be really expensive, but I went with a good balance of options and price. GeekDesk (www.geekdesk.com) makes an electric adjustable desk that has memory locations so you can set it for different people or for sitting and standing. These things are sturdy too; my GeekDesk Max can hold 335 lbs. and go from 23 inches high up to almost 49 inches. Just to give you an idea of scale, I’m six foot, three inches, and my standing desk is 48 inches.

You can buy just the base without a desktop if you have one or want to make your own. What I found that helps provide better arm support is a half circle cutout where my midsection meets the desktop. I like having my arm, from my elbows to the ends of my fingers, resting flat on the desk — but with a regular rectangular top, it’s harder to do that.

Besides the height adjustable desk, all I really needed was computer monitors. I bought two very thin and light Viewsonic VG2436wm 24-inch LED monitors (www.viewsonic.com) and put them on articulating arms. The articulating arms allowed me to adjust the height so that the monitors were exactly at eye level — so I’m not tilting my head down all day. Also, I removed the base on which the monitors normally sit, thus shrinking their footprints and freeing up desk space.

All was well, but I soon realized I wanted to see if there where things that could be done while standing in place to at least give my legs something to do other than just standing while working. These things can range from exercise to balance and stretching tools, or whatever else you can imagine.

I considered a stationary bike but, while that would be much better than just sitting in a chair, I wanted to do something that kept me standing. A treadmill seemed like the perfect answer. TreadDesk (www.treaddesk.com) makes a treadmill specifically for working at a desk. It doesn’t have the typical upright handles; it’s just the treadmill with a remote unit that you use to control it from your desk. It has a maximum speed of 4 miles an hour, so you can’t do (nor would you want to) any running, but that’s a really brisk walking speed. I found that 1.5 to 2.5 miles per hour worked pretty well for me. Even at 1 mile per hour, you could walk many miles a day, without having to allot dedicated time to exercise.

The treadmill isn’t dead silent, but the noise level is pretty reasonable for what it is. The only real downside is that it isn’t very portable. If I had a dedicated space for my editing setup, I would definitely own this. I’ve seen pictures of people building up a false floor around it so that it’s a little safer in smaller spaces and looks more discrete. It’s about 8 inches high, so unless you’ve got some room around it, you could be tripping over it.

I have a mini elliptical/step machine that I’d been using, but I found that unless I’m doing things like watching down a reel, it’s hard to be bobbing up and down while trying to edit. It made more sense to try things involving balance and light stretching. One product that my wife (a physical therapist) recommended was Airex Balance Pad (www.airex-mats.com) that she uses for rehabilitation work. It’s basically a thick foam pad that you can double up to make your legs work a little harder. The added bonus is that it is welcome padding for your feet too. By standing on one foot, you force that leg to work harder to balance on the foam as it compresses.

Another product from a company called Icon Fitness (www.iconfitness.com) is the Rip:60 Strength Disk. It’s flat on one side and rounded on the bottom. If you stand on it, it’s a balance disk. But it is also weighted so you can pick it up by the handles and do some arm exercises as a break. Icon also owns another company named Altra, which makes sneakers called Zero Drop. They are designed for running, but I found
they work great for standing. They are flat from heel to toe instead of the forward-prone design of most sneakers. I’ve found them to be more comfortable for standing than any of my other sneakers.

If you want something even more challenging, you could go for a Bongo Balance Board (www.fitterfirst.com). You may have seen one before; it’s a skateboard (without the wheels) that you stand on while balancing on a rolling cylinder. It’s definitely an advanced product, and very difficult to do while editing, but it does force you to use more muscles than you do just standing.

It really surprised me how quickly and easily I was able to transition to standing all day while working. Except for the trial and error of finding the right shoes, I was standing all day from the beginning. Not that I had any major back problems before, but I do notice that my back doesn’t bother me as much; no more pinched nerves, sore lower back or numb butt. The best part is that I just truly enjoy standing while I work. It honestly does not feel like I’m making an effort to do it. When I enter my edit bay every morning, it just feels natural to walk up and start working.

Several colleagues have begun standing, and not just because I tried to influence them. I just started doing it quietly and people began coming in to see my setup and asking questions. One of them had to spend a period of time sitting again and commented on how he didn’t like having to do it. So far, three editors on my floor have been doing it for over six months now and all of them are still going strong. A fourth friend of mine who works at another facility has a small portable unit that sits on top of his desk
that allows him to stand.

Going the standing route doesn’t take as much effort as you might think. With a desk that can be used to stand or sit at, you’ll have the option to go back to sitting if needed. Even if you aren’t ready to stand while working, just try to get up and move when you can. 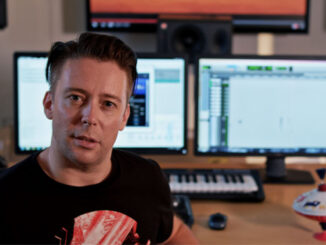 My Father, the Soundman: Coming Full Circle on the Fox Lot 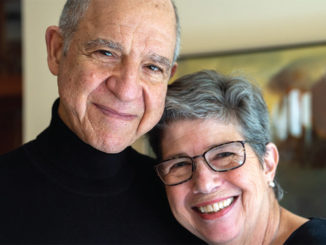 Lee’s Legion of Fans: Some Words from His Admirers…