An overwhelming majority of Editors Guild members believe that discrimination occurs in the edit bays, dub stages and other places where they work, and most do not feel safe reporting discriminatory behavior to higher-ups, according to a new survey commissioned by the Guild’s Board of Directors.

Meanwhile, the survey found that despite the publicity surrounding industrywide diversity efforts, gender and ethnic representation within the Guild itself has remained basically unchanged compared to four years ago.

Last summer’s 2020 Editors Guild Demographics and Workplace Survey drew record participation from the membership, allowing the union to examine gender, ethnicity, sexual orientation, age, and even pay within the union (complete details will be online at cinemontage.org).

Guild staff and member-volunteers reached out to members via ThruText, a person-to-person communication application. Collectively, they texted 7,859 members over the span of a week and a half. The effort drew a record-breaking response from 3,583 members, or more than 47% of the total membership.

COVID-19 resulted in an industrywide shutdown of the ﬁlm and TV businesses, and the death of George Floyd and other racially-tinged incidents sparked social unrest over the summer. This spurred the Board to conduct a survey to address the issues of inclusion and discrimination. The Diversity Committee’s 17-member Survey Task Force, led by Women’s Committee Chair Dorian Harris, ACE, spent a month discussing and creating a 14-question survey which went out to members on July 31, 2020.

Guild officials say the results prove the need for more work on diversity and inclusion.

“It is apparent to me the Guild needs to build a real support system for our BIPOC members, as well as women, LGBTQ+ community and people with disabilities, both visible and invisible. We are doing this through many different facets,” said Cathy Repola, National Executive Director of the Guild. “One of them is this demographics survey, and the information collected from it is being utilized to inform our overall approach.”

Editors Guild President Alan Heim, ACE, added: “We at the Guild have a lot of work to do to get to a better level of equality, diversity, and inclusion.  In order to do that work effectively, it is important to have real data on where we are currently, and we appreciate the input from our members who took the survey.”

DISCRIMINATION IN THE WORKPLACE 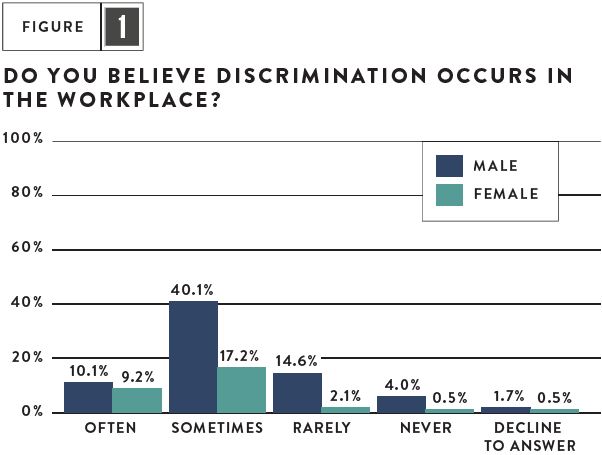 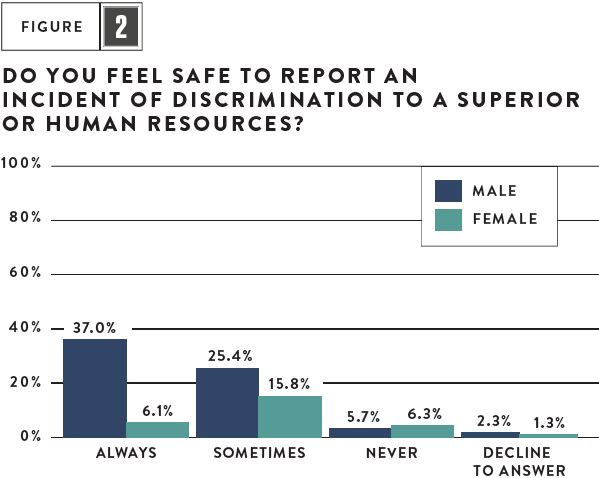 Repola said, “I see all that is happening regarding the increased awareness of systemic racism and the marginalization of other groups and communities as a real opportunity for the union to act. We must be a leader in making the working lives of all of our members free of the subtleties of microaggressions and hurtful jokes as well as blatant discrimination and harassment that occur in the workplace.”

The results of the survey show that the overall makeup of the Editors Guild has only improved marginally over the last four years in terms of ethnic diversity. The 2020 survey was adjusted to track ethnic representation more speciﬁcally than a similar survey conducted in 2016—the last time the Guild polled its members about these issues.

The survey is now able to account for members of more ethnicities. [Fig. 3] 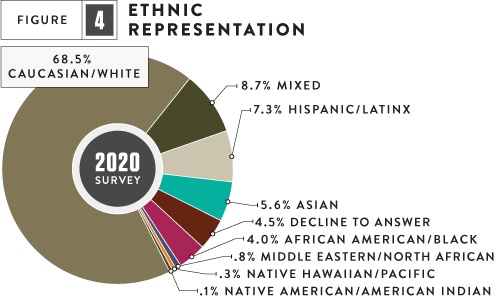 But overall, the comparison between the two surveys shows how little has changed.

In a similar survey conducted in 2016, 67.71% of members identiﬁed as male and 29.53% of members identiﬁed as female. While it seems that there is a 1% decrease in female representation from 2016 to 2020, one major change impacting this year’s gender data is the inclusion of diverse identities for gender representation, breaking from “female / male” binary categorization from years past. It is also worth noting that only 2,200 members participated in the survey in 2016, representing a smaller pool of members than those who participated this year.

The 2020 LGBTQ+ community accounted for 11.47% of Guild members, according to the survey. More than 81% of the members who responded identiﬁed as heterosexual, while 7.51% declined to answer. [Fig. 5] 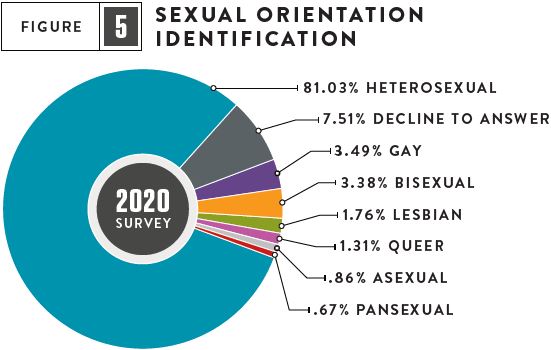 In the 2017 “Who We Are” Demographics Survey (a shorter survey with only 1,215 member responses, which is a signiﬁcantly smaller sample rate of overall membership participation compared to this year), LGBTQ+ members accounted for 12.51% of the respondents while 88.97% of the respondents identiﬁed as heterosexual. 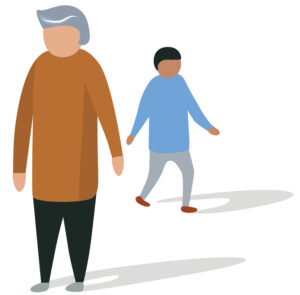 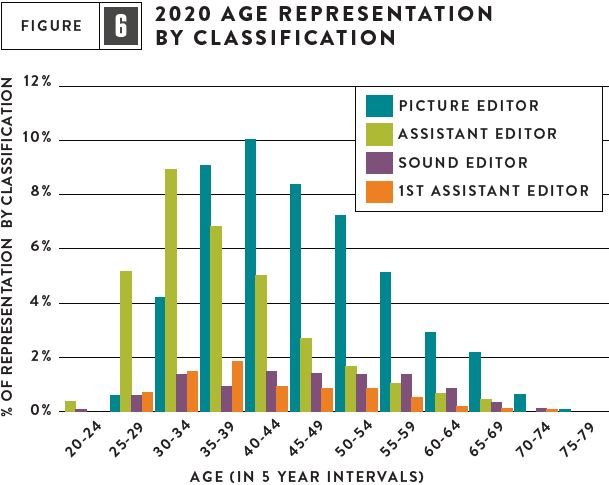 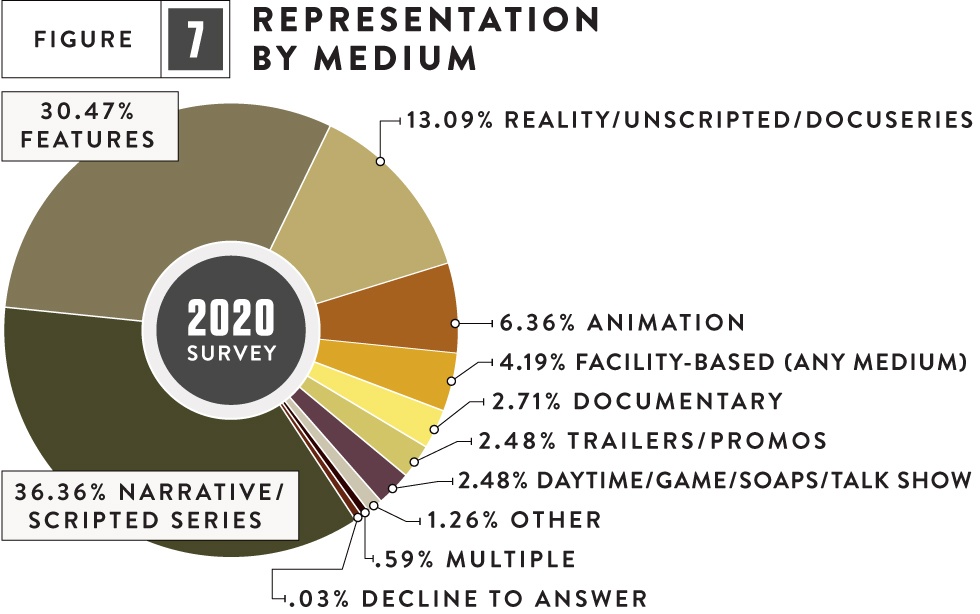 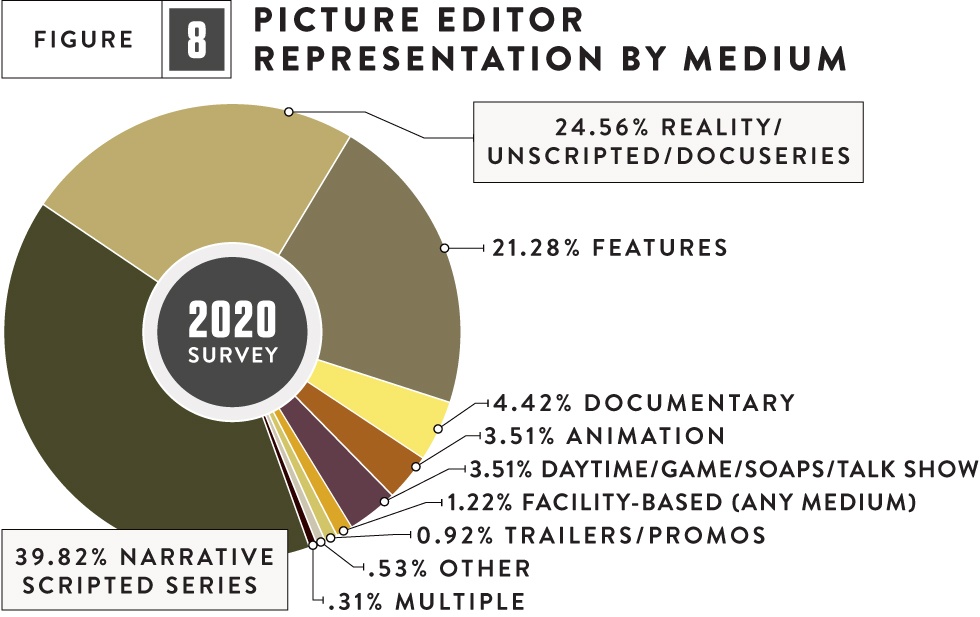 The vast majority of all Assistant Editors surveyed primarily work on Narrative / Scripted Series projects, at 51.02%.

86.84% of Sound Editors who responded work within either Features or Narrative / Scripted Series. 63.08% of those who identiﬁed as 1st Assistant Editors worked primarily on Features. 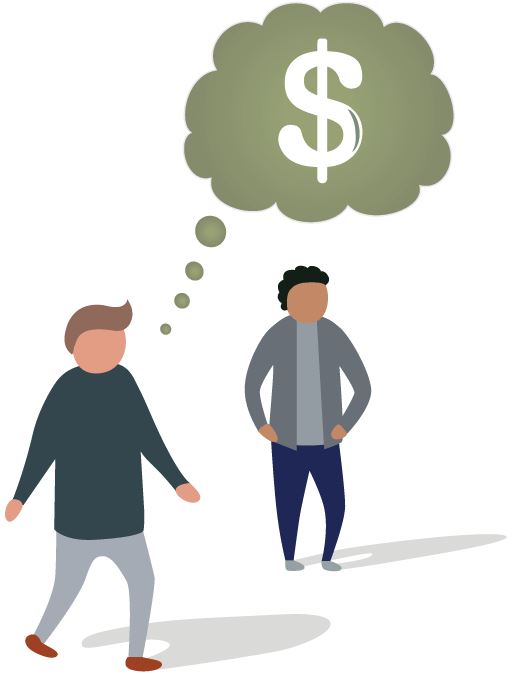 The survey included an open-ended question where participants were able to voluntarily input their daily or weekly pay rate. 2925 participants wrote an answer for this question, however only 2435 of those entries provided valid answers based on the question asked. For those who provided a daily rate, that amount was converted to a weekly rate, based on an average 5-day work week. A few participants answered the question by providing an hourly rate, which could not be effectively translated into a weekly rate given lack of information such as guaranteed weekly hours, or guaranteed work-days. As a result, that hourly rate data was inconclusive and unable to be included in this analysis. The participants who stated that they were working, “scale,” also could not be included in this analysis due to lack of information, as tier level varies from project to project. Some participants interpreted the question as if they were being asked if they were being paid weekly or daily, with nearly all of those answers reporting that they indeed were being paid weekly.

The number of valid entries still represented 68% of the survey participants. These valid entries provide the basis for the following pay rate analysis. It is to be noted that, this information is personally provided and anonymous self-reporting and therefore not an accurate reflection of an actual scientific or mathematical analysis of real wages or salary. 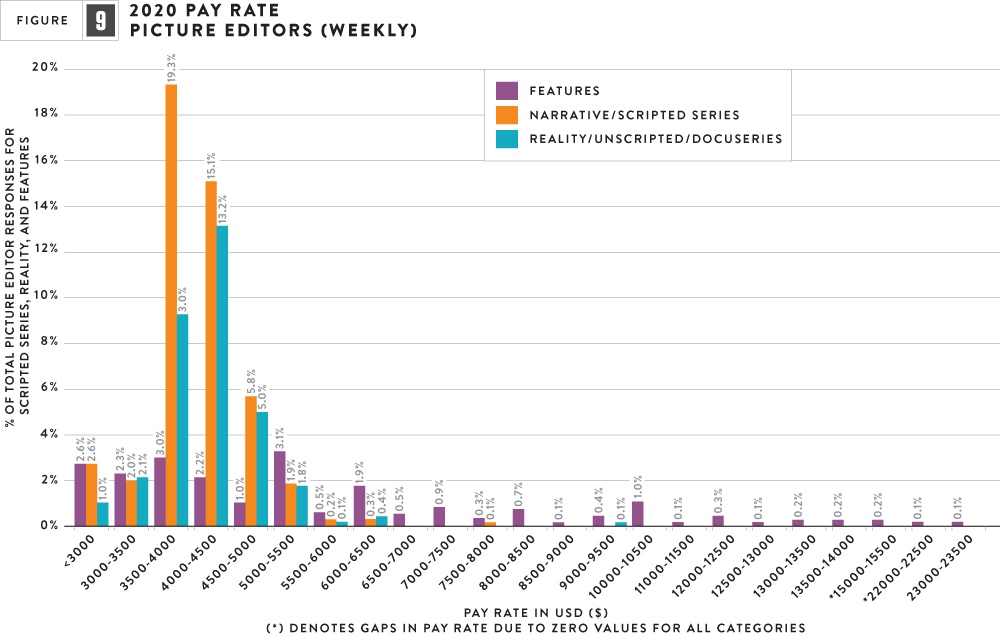 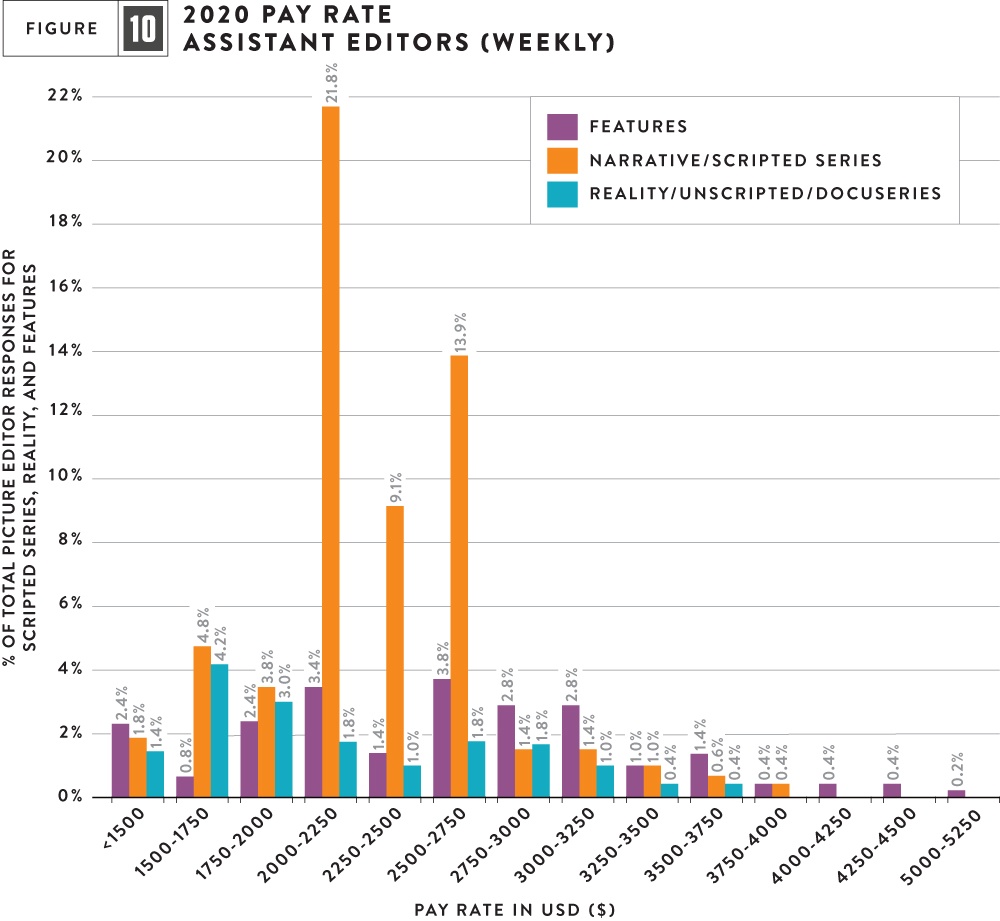 Sound Editors made up 7.42% of the all the members who responded, representing the third largest group of participants of the survey. 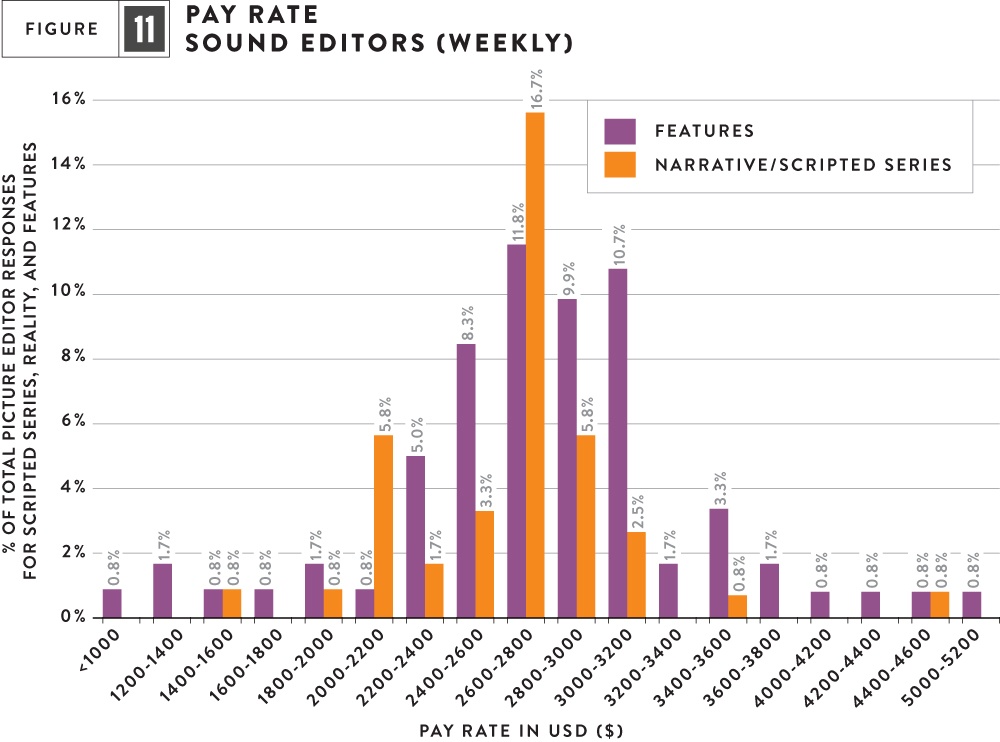 None of the Sound Editors surveyed were represented on “Reality / Unscripted / Docuseries” projects because those Picture Editors in that medium, are primarily responsible for their own sound editing.

Diversity Committee Co-chairs Lillian Benson and Maysie Hoy asserted in a joint statement: “The next step for the Editors Guild is to utilize the data the survey provided to support important conversations and create initiatives which can lead to concrete actions that impact justice, equality, diversity and inclusion for our membership.” 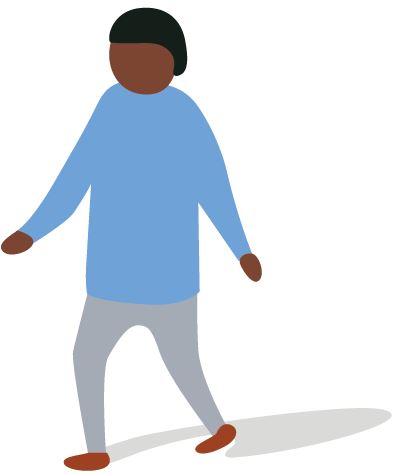 “I am so proud to be part of this union’s leadership team, one that not only acknowledged we need to play a key role in the long overdue changes that need to take place, but one that also fully embraced with conviction the work we need to do to accomplish this,” Repola said.