Post-production professionals are regularly asked why they select specific picture cuts or sound transitions. Those with successful careers know how to discuss, and sometimes defend, their choices in language that producers and directors understand quickly. There are times, however, when a simple explanation is unsatisfactory. There are also times when it seems that no answer will explain why a cut does, or does not, work. Enter here Michael Frierson’s text, Film and Video Editing Theory: How Editing Creates Meaning, a masterful summation of far-ranging thoughts from cinema’s major editing theorists. 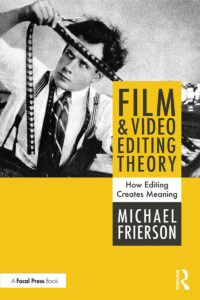 It may seem that theory has little place in Hollywood’s fast-paced post industries, but consider that virtually everyone who ever makes a cut is aware of Russian film director and theorist Sergei Eisenstein’s examples of montage — most famously the Odessa Steps sequence in Battleship Potemkin (1925) — and also has seen the results of the “Kuleshov effect” (the projection of the same close-up of actor Ivan Mozhukhin’s face, intercut with shots of a bowl of soup, a woman in a coffin and a child playing, which caused audiences to marvel at the performer’s sensitivity and range).

Less well known is that Eisenstein categorized six types of montage, and that he and his contemporary fellow filmmaker Lev Kuleshov held opposing views of what constituted good editing. It may well be that no producer today is interested in hearing the details about either approach, but editors who understand them, and can translate that understanding into their work, can justify choices, even if only for their own satisfaction. The ideas compiled in this book might make a day’s work in the editing room more meaningful.

For students and novices, Frierson has created an essential book. It details, in chapter order, the motion picture editing theories of Herbert Zettl, Noël Burch, Edward Dmytryk, Walter Murch, ACE, CAS, MPSE, David Bordwell, Eisenstein, André Bazin, Andrei Tarkovsky and Maya Deren, and concludes with a section on “Rhythmic and Graphic Editing.” One might quibble with the order of the chapters; they are not arranged chronologically, but the author helpfully cross-references among them.

Thankfully, he also acknowledges the beginnings of cinema editing, chiefly in the chapter explaining Burch’s classification scheme that editors “can use to examine particular edits and think about how they articulate space and time of a particular film.” Key classic examples here are films by Vittorio De Sica, Jean Renoir and Orson Welles. The contributions of Edwin S. Porter and D.W. Griffith in transforming cinema from stage-like representations of separate actions, made coherent to the audience only through a live script reading by an exhibitor/narrator, to fully formed on-screen stories told via the use of editing (circa 1907) are made clear. So too this book acknowledges the accomplishments of writers who excavated the secrets of early cinema, including Eileen Bowser, Charles Musser and Barry Salt, the last who argues that jump cuts appeared in films before 1908, and that optically printed freeze frames were used as early as 1923.

One of the many values in Film and Video Editing Theory is that readers need not plow through all 15 Bordwell texts to get a sense of his perspective.

Although the concepts of each theorist often overlap in actual edited results, each has its own ontology, terminology and justification. These range from the simple (Dmytryk’s conviction that the most important way to edit is to find the one and only “scene, move or reaction which most effectively delivers its dramatic message,” and Murch’s idea — admittedly based on John Huston’s insights — that shot changes mimic the blink of the human eye) to the Byzantine (Bordwell’s deconstruction of the temporal order of narrative events into schemata that he deems either “fabula” or “syuzhet,” terms that originated in the Russian Formalism school of literary criticism). Bordwell, a highly respected scholar and author of 15 books on cinema, bases his breakdown on Russian formalist literary theory, as exemplified in the collection Poetica Kino.

One of the many values in Film and Video Editing Theory is that readers need not plow through all 15 Bordwell texts to get a sense of his perspective. Frierson has done that meticulous research for each theorist he dissects. He also provides helpful introductions to the lives and major works of each, which make clear the social and cultural contexts in which they worked. It is enlightening to learn that Bazin, co-founder of Cahiers du Cinéma and the major proponent of realist, long-take theory, sought to understand the thinking patterns of reptiles, and was deeply influenced by early 20th century philosopher Henri Bergson — a writer who attempted to define the way humans exist in an evolving experience of nature.

Film and Video Editing Theory also has hundreds of fascinating footnotes, a short glossary and a clear guide to the photographs. Readers may recognize that many of the theories presented come intuitively to good editors, but reading or re-reading methods that describe, and sometimes quantify, this native intuition can be an almost reassuring validation of one’s work.

Frierson’s punctilious efforts go beyond the pages of the text, multiplying the usefulness of Film and Video Editing Theory.

Publisher Focal Press unfortunately once again imposes a travesty on its author and its readers with the abysmal quality of the photographs. Studying editing via double exposure within the frame in Citizen Kane, which Frierson describes in his chapter on Bazin, is a dreadful disservice to everyone, not least the film’s director, Welles. The images’ details can barely be distinguished. This use of cost-cutting reproduction quality should not be allowed in a paperback book that costs over $40, but sadly, the publisher does this repeatedly in its publications.

Frierson’s punctilious efforts go beyond the pages of the text, multiplying the usefulness of Film and Video Editing Theory. Examples from many of the sequences that he discusses, both classic and surprising, are available online in capsule form at Critical Commons (www.CreativeCommons.org). This site, begun and hosted by USC Cinema, allows teachers to post and use written and audio/visual material in compliance with the Digital Millennium Copyright Act. It is available to everyone who cares to register.

So when Frierson describes Deren’s use of a whip pan by a subjective camera — and a hidden cut within the pan — the reader is referred to www.criticalcommons.org/Members/m_friers/clips/meshes-of-the-afternoon-female-figure-dreams. A search for Frierson’s contributions to the site will return over 40 video examples, ranging from use of flash-forward in Easy Rider (1969) to flashback in Iron Man (2008) and beyond. Each relates to a section of the book and each contains more commentary by the author. This astonishingly rich resource should be used by anyone tasked with training editors and can be a valuable reference tool for even the most experienced.

This Quarter in Film History: Dedicated Followers of Fascism

January 1, 2007 This Quarter in Film History

‘Cabaret’ proved that a mainstream musical could feature avant-garde editing and design, and be sexually unconventional and political. […]

Tom Eagles on Editing the Western ‘The Harder They Fall’

By Rob Feld  Tom Eagles attended an undergraduate film program in New Zealand but, with his school loans looking onerous, […]

As a seven-year-old living in the jungles of Matute, Colombia, I was surrounded by an exotic land. My pets weren’t limited to the three dogs and six cats that roamed but also included a macaw named Ludwina, a howler monkey named Tarzan, several tortoises and an assortment of parrots and parakeets. […]