The Motion Picture Editors Guild dedicated the Ronald G. Kutak Board Room of its West Coast headquarters office, with a ceremonial unveiling of a sign and plaque at its Board of Directors meeting on Saturday, June 10. Kutak retired from his long-held post as the Guild’s National Executive Director in October 2016, after which the Board approved a motion to name the room for him. 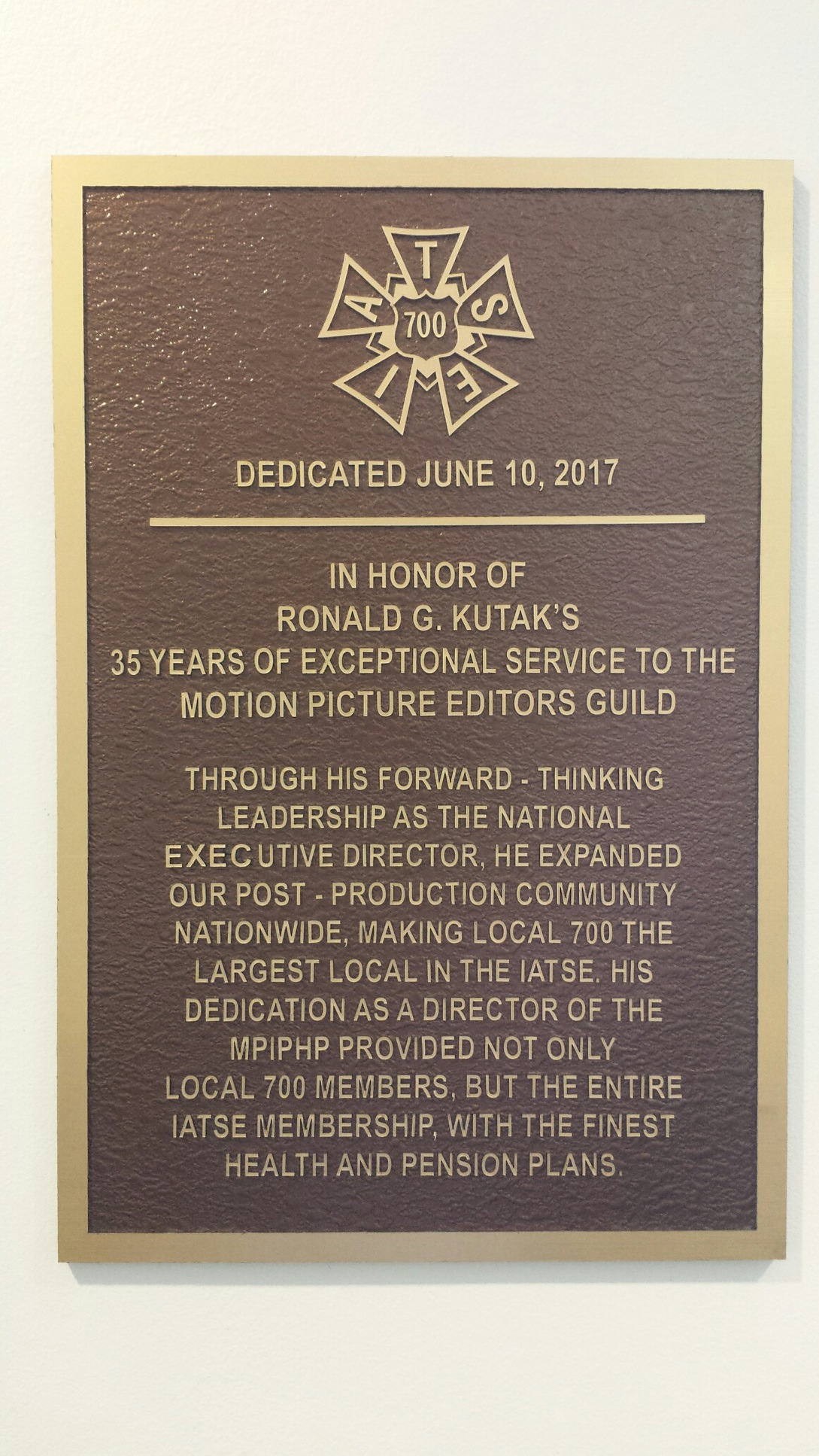 Board members arrived to the regular meeting to find flutes of mimosas waiting on the conference room table. Toasts and tribute speeches to Kutak soon followed, who was present for the ceremony.

Guild staff removed a curtain revealing a raised lettering on the wall, reading “Ronald G. Kutak Board Room,” as well as a plaque that accompanies the framed IATSE original charters of the various locals that eventually merged into Local 700.

The dedication plaque states: “In honor of Ronald G. Kutak’s 35 years of exceptional service in the Motion Picture Editors Guild. Through his forward-thinking leadership as the National Executive Director, he expanded our post-production community nationwide, making Local 700 the largest local in the IATSE. His dedication as a Director of the MPIPHP [Motion Picture Industry Pension and Health Plans] provided not only Local 700 members, but the entire IATSE membership, with the finest health and pension plans.”

In introducing the tributes, Guild President Alan Heim, ACE, referenced the 1998 merger of the East and West Coast Editors Guilds, Locals 771 and 776, respectively, that Kutak oversaw: “Ron took us out of the desert and brought us to the Promised Land, as it were. He enriched this guild enormously with his dedication, intelligence, union savvy…and stubbornness.”

The Guild’s Vice President, F. Hudson Miller, MPSE, remarked, “It is entirely fitting, and appropriate, that we dedicate this room to the man whose vision and years of service built Local 700, Mr. Ron Kutak,” eliciting resounding applause.

Naming the room “is well deserved” said Guild 2nd Vice President Louis Bertini, MPSE, who addressed Kutak and the Board via video conference along with other members on a live uplink from the New York office and other locations. “Ron, though you are retired and have moved on to other endeavors, a part of you will always remain here,” he toasted.

Bertini reminded the Board of the legacy of Kutak’s work uniting the two editorial locals that strengthened MPEG as a nationwide organization. “The merger is what saved us, plain and simple,” he said, lauding Kutak “for all the work you did on our behalf and for putting our union back together.”

Miller concurred, adding, “The deals that Ron negotiated promised to double our membership and re-form us into a somewhat oxymoronic-sounding ‘national local.’ Ron successfully sold us on his vision of a stronger guild, a national guild, a new guild to take us into the 21st century.”

“This has much more to do with the people who sat around this [Board room] table then it has to do with me,” Kutak said, addressing the meeting after the tributes. “If not for the dedication that everybody had to the single idea — that unity and consensus and non-personalization of issues were paramount above all other things — I’m not sure that anything that has been positive to the local would have ever happened.”

“Ron’s belief that the fight belonged between the producers and the guild, and not between its members, has been the key to both his — and our — success,” concluded Miller.

About A.J. Catoline 31 Articles
A.J. Catoline is a graduate of NYU's Tisch School of the Arts and USC's Master of Professional Writing Program, and a Board Member of the Motion Picture Editors Guild, IATSE, Chairman of the MPEG Publications Committee. He is a picture editor working in Los Angeles, recently on "Ted Lasso" for Apple TV+. He can be reached at ajcatoline@gmail.com

The Meaning of Membership: We Are Our Brother’s Keeper

We have duties to one another. We are strongest when we are one another’s keepers.  […]

Cathy’s Column: After a Year of Struggle and Challenge, There’s Hope Ahead

March 4, 2021 From The National Executive Director

Let us remain consistently proud of what we can achieve through unity, strive always to be better, and open our hearts and our minds to the differences we have and to what unites us. […]

In a nondescript Burbank falafel joint on a sweltering Sunday afternoon in July of last year, co-workers crowded around an impromptu conference table made up of several four-tops pushed together. A tacky film adhered to the furniture, as is typical of greasy spoons. Sweaty forearms clung stickily to gummy tabletops. […]