The number of books dedicated specifically to motion picture editing is not large. There is a steady supply of how-to guides, often geared to specific technologies, from The Language of the Cutting Room: A Primary Reference Manual for the Assistant Editor of 35mm Film by Bernard Balmuth, ACE (1980), to a new edition of Avid Editing: A Guide for Beginning and Intermediate Users by Sam Kauffmann and Ashley Kennedy (due February 2017). Noted filmmakers have shared their ideas and experiences from one century — The Technique of Film Editing, written and compiled by Karel Reisz (1953) — to the next — the iconic In the Blink of an Eye from Walter Murch, ACE, CAS, MPSE (2001). 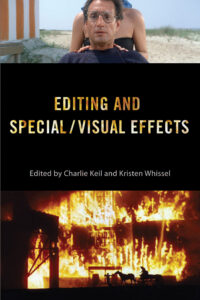 There also are books on editing theory; Jay Leyda famously collected, translated and edited Sergei Eisenstein’s writings on montage from the 1920s and 1930s into Film Form: Essays in Film Theory in 1949. Auteur theory of the 1960s and ’70s relegated editors to the background, especially for masters like Hitchcock, nine of whose major films were edited by one man, George Tomasini, ACE. Editing largely escaped the Ontological, Phenomenological, Structuralist, Post-Structuralist, Lacanian-Freudian and other abstract analyses that plagued American film studies in the last two decades of the 20th century.

Fortunately, cinema studies turned in a different direction in the 21st century. Sound theory, including sound editing, has become a specialization on its own, and there is an emphasis on solid historical documentation, especially of American production. Editing and Special Visual Effects, edited by Charlie Keil and Kristen Whissel, is one of the newest examples of this trend.

Like many texts, this book is an anthology of related essays, often specially commissioned and featuring a lengthy introduction by the editors. Editing such anthologies is one traditional way that academics achieve tenure and promotion. Keil, a cinema studies professor at the University of Toronto, authored Early American Cinema in Transition: Story, Style and Filmmaking, 1907-1913. Whissel is the author of Spectacular Digital Effects: CGI and Contemporary Cinema and a Professor of Media Studies at UC Berkeley. Their approach to film is greatly influenced by prolific and influential scholar David Bordwell, who with his wife, Kristin Thompson, can take much of the credit for the critiques mounted against the theoretical “isms” and “ists.”

Keil and Whissel present the idea that film picture editing and special visual effects are historically linked and can be fruitfully considered together. This may seem obvious, but Editing and Special Visual Effects is the first major book to deeply explore the connection. To do this, the book’s editors gathered 11 other university film scholars, each of who writes in a specialized area. The material is organized chronologically with one essay on editing and one essay on special visual effects paired in each of six historical periods from “The Silent Screen, 1895-1927” to “The Modern Entertainment Marketplace, 2000-Present.”

These chapters echo some of the generally accepted periods of American film history, but are arbitrary. One can argue that what Keil and Whissel term “Classical Hollywood” — more generally referred to as “Hollywood’s Golden Age” or “The Studio Era” — lasted beyond the end date they choose, 1946. The editors elect to call 1947-1967 “Post-war Hollywood,” which stretches the term; it ill-serves films made after 1960 to clump them together with the Hollywood movies produced immediately after the war.

The book also defines 1968-1980 as “The Auteur Renaissance” and 1981-1999 as “The New Hollywood.” There is nothing inherently wrong about this; however, once years are so finitely limited, such labels tend to stick. Film editors’ careers cover many years — include many personal, artistic, economic and technical influences — and rise and fall regardless of the calendar.

The primary research and emphasis on factual accuracy that most of the contributors bring make Editing and Special Visual Effects a worthwhile effort. The book’s hundreds of notes include valuable, too seldomly consulted sources, including the Academy of Motion Picture Arts and Sciences’ oral histories with people such as former Editors Guild President Ralph Winters, ACE, editor of over 70 films and best known for his Oscar-winning work on Ben-Hur (1959); Margaret Booth, ACE; and Rudi Fehr, ACE (who each comment on the Warner Bros. and MGM practice of assigning editors to the set of first-time directors), among others.

Articles from contemporary trade magazines are well referenced – “Film Editors Organizing Own Section in Academy,” Film Daily, 1932; “The Butt Splicer: Editor’s Aid or Gimmick,” CinemaEditor, 1962; “The Return of Editdroid,” Millimeter, 1994; and “Editors Spliced in Two: Rivalry Splits Biz into Avid, Final Pro Camps,” Variety, 2011, are only a few examples. The Editors Guild itself appears in “The Auteur Renaissance” section, wherein critic Peter Rainer asks, “Do Film Critics Know What Editors Do?” in the January-February 1995 issue of Motion Picture Editors Guild Newsletter, the forerunner of CineMontage. The popular press is consulted as well; Paul Monticonne, in his essay covering 1928-1946, quotes a 1940 article in The Los Angeles Times, headlined “Lady Film Cutters: A Vanishing Profession,” in which the Secretary of the Society of Motion Picture Film Editors (predecessor of the Editors Guild) comments, “Women cutters are resented by their male colleagues.” It is unfortunately left to the book’s reader to decide if the Secretary found this to be a good or a bad trend.

Use of primary research sources and a historical perspective is a hallmark of Bordwell/Thompson’s approach to cinema studies. This influence in Editing and Special Visual Effects makes it more relevant to working editors than previous books on film theory (Eisenstein excepted). While academic, the writing is for the most part logical, and pairing studies of picture editing with special visual effects seems particularly sensible within a historical overview. For instance, the magical appearances and disappearances of sprites and devils, seen in many early silent trick films, was accomplished by editing in the camera or with a substitution splice. The dissolves and superimpositions provided by optical printers were another way to make transitions, and even specialized montage sequences, à la Slavko Vorkapich, were sometimes regarded as special effects. The matchup of editing and effects holds up today when moviemakers at every level possess technology that allows them to create cuts, transitions and effects digitally.

Unfortunately, some contributors offer generalizations that may make statistical sense, but go against industry experience. A major example of this is an extrapolation of Monticone’s conclusions that leads the Keil and Whissel to state in their introduction that the complexities of shooting sound films “…meant that editing had to begin while production was still occurring so that a rough cut would be ready virtually as soon as filming was complete: One byproduct of this change in editing timelines was the elimination of the director as part of the editing process.” A change in timelines, yes. Greater influence of studio heads and major producers on the edit, yes. The development of larger post departments with supervising editors who exerted levels of control, yes. But elimination of directors from the editing room, NO! The book also makes the claim that directors of this era had far less involvement in pre-production — a notion that might have surprised Alfred Hitchcock or Orson Welles.

The Directors Guild of America fought for directorial control from its beginning in 1936, and at one point had invited picture editors to join its ranks (they declined). John Ford famously did not get involved in editing. He was an exception, however, known for shooting so that his films could be edited in one way: his. Virtually every other major Hollywood director of the studio era retained involvement in post-production. They might be prepping or shooting their next picture, but most often directors were working on the same lot at which their previous movie was made.

Then, as now, producers and directors sat in small screening rooms and gave editorial notes based on various cuts. At the very least, a lunchtime visit to the editing room would be normal. It is difficult to imagine anyone preventing Frank Capra, Raoul Walsh, Fritz Lang, Howard Hawks, George Cukor, Rouben Mamoulian, William Wellman, Josef von Sternberg, Henry King, William Wyler or King Vidor from looking into a Moviola monitor. As the DGA website states, “At the end of 1935, on the heels of a Paramount edict that its contract directors would be fired if they didn’t accept the pictures that were assigned to them, 13 directors met at Vidor’s house.” What they had been fighting for individually now became a common cause, including “…freedom from interference from micro-managing producers and studio executives; the right to be in the editing room and deliver their own cut of the film that would bear their name.”

Editing and Special Visual Effects is an important step in rightfully positioning the art of editing within the academic canon. While it suffers a bit from being written by observers from the Ivory Tower, it also benefits by offering the outsiders’ view. There are many important facts, useful examples, good ideas and provocative questions to ponder.

“Let me just start out by saying that I have everything before Avatar, and then Avatar––because there was nothing normal about how we did this film”- Stephen Rivkin […]

Ginny Katz is a pleasure to work with, and her warm and generous spirit characterizes her friendships just as her distinctive talent marks every cut of her films. […]