On Sunday, April 7, 3:00 p.m. to 6:00 p.m., the Editors Guild’s LGBTQ Steering Committee, a sub-committee of the Guild’s Diversity Committee, is hosting “Let’s Get Better Acquainted: A Networking Mixer” for our LGBTQ community at the Guild’s LA headquarters. In advance of this unprecedented social event, the committee here presents to Guild members its report on a roundtable discussion convened earlier this year to focus on the community’s major concerns in the industry.

In late January, the LGBTQ Steering Committee presented a discussion at the Guild entitled “Working It Out: Being LGBTQ in Post-Production.” About 30 members participated and, even for a Diversity Committee event, the group was…well, diverse. In attendance were members from picture, sound and music departments, editor and assistant editor classifications, and scripted, reality and animation genres, with the makeup of attendees breaking down to about half female and half male.

“Coming out” in one’s personal life is never done without considering all possible ramifications, both good and bad. It is only made easier by seeing oneself represented in the world around us, whether amongst friends, in the media or on the job.

The LGBTQ community’s openly out members continue to add “firsts” to their accomplishments across the nation: the first transgender mayor elected in 2008, the first professional football player drafted by the NFL in 2014, and even the first federally recognized same-sex marriage in 2015, a mere four years ago. Our roundtable was another one of these historic firsts, as it was the first time the Guild had ever sponsored an event specifically for its LGBTQ members.

The overarching theme of the round-table was LGBTQ visibility in the workplace and sharing the why, when and how of coming out, as well as the issues surrounding that decision. Showing her support, the Guild’s National Executive Director Cathy Repola attended and started off the discussion by sharing her own experiences as both a professional in the entertainment industry and as a member of the LGBTQ community.

As introductions around the table began, a commonality emerged: Most of the attendees were motivated not so much by discussing LGBTQ visibility at work, but by the opportunity to be visible to one another on a personal level. With the exception of one committee member who identified as a “loud and proud ally,” everyone seated around the table was an out member of the LGBTQ community. Underscoring the importance of visibility was the fact that, aside from the committee members themselves, almost no one had ever met or worked with each other before.

As one attendee jokingly put it, “I came here today to see who all of you are!” Another claimed to have been a proponent of inclusion for decades but had never worked with another LGBTQ editor. On a more practical note, a third wanted to know other LGBTQ members, possibly to hire them to add diversity to the member’s workplace.

With the exception of one committee member who identified as a “loud and proud ally,” everyone seated around the table was an out member of the LGBTQ community.

The issue of LGBTQ visibility is a conscious one, unlike, in most cases, the visibility of one’s gender or race. While assumptions may be made about a person’s sexual orientation, there is no certainty on the matter until that person chooses to reveal it to others. As a result, LGBTQ people spend their whole lives navigating the coming out process with each new networking contact, employer and co-worker — not to mention everyone in their personal lives.

Many attendees shared that they out themselves in the workplace as early as the interview process to avoid potentially uncomfortable situations down the line. This is in stark contrast to the approach taken 20-plus years ago, as voiced by some of the long-standing members. Others said they come out on a case-by-case basis, but no one felt compelled to lie about being LGBTQ if the subject came up. 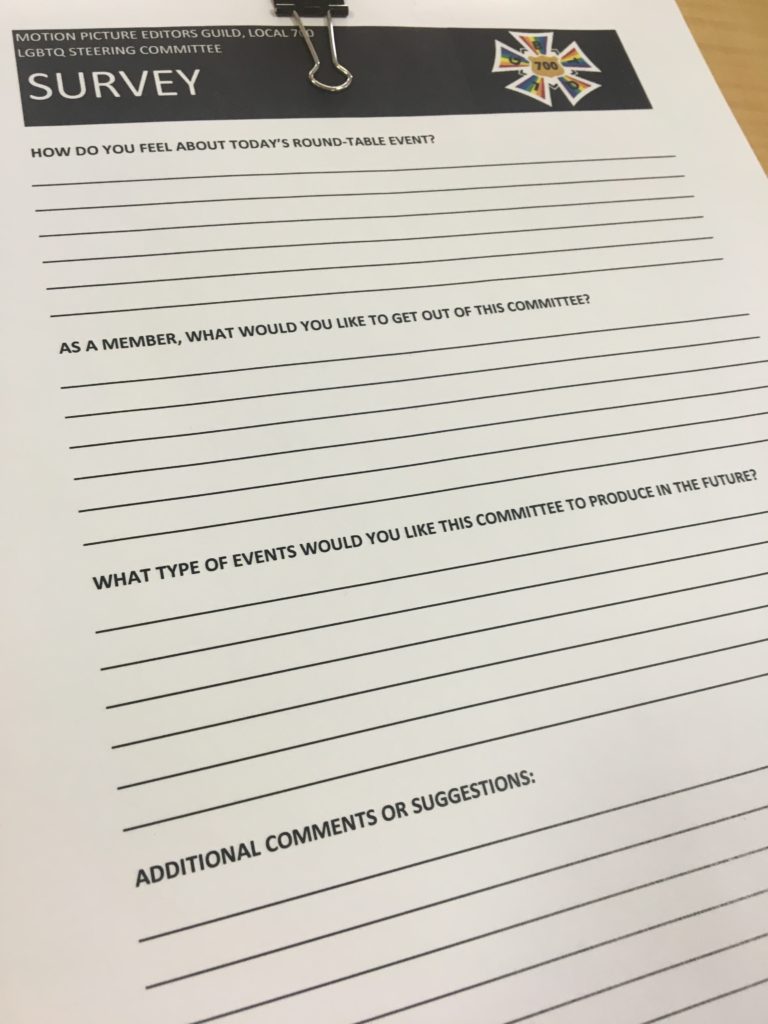 The discussion expanded to include issues ranging from co-workers who “over-share” about their personal lives with LGBTQ members to those members with spouses and children being asked questions that would be both inappropriate and ridiculous if asked of a straight person: “How did you have a baby?” “Who carried the child?” “Are they adopted?” Also brought up was the hierarchical nature of post-production and how assistant editors were often more afraid of coming out than editors. The assistant editors felt that because they were not heads of a department, there was a risk involved in revealing their sexuality, especially since bosses or department heads have historically been straight.

As a corollary to over-sharing, the roundtable also touched on the issue of setting boundaries with co-workers. When reacting to overtly sexist comments, one attendee noted, “I’ll say, ‘Let’s talk about this over coffee. If people overheard what you¹re saying, they could misinterpret it and take it to HR [Human Resources]. That could be a problem.’ Frame it as an HR department issue, not a personal one.”

With all the aforementioned issues, the attendees generally agreed that their reactions to situations were based on the intention of the person asking the inappropriate question or telling the inappropriate joke. But even if the people were sincere and well-intentioned, LGBTQ people are still constantly in the position of “teaching” others about the LGBTQ community — whether they want to (or have the time to) or not.

This is simply not the case with straight people who are in the majority, both at work and in society at large. As an example, when was the last time you were at work and heard the question, “I just don’t get it. Tell me how this ‘straight’ marriage thing works again?”

A change in attitudes is on the horizon, though, as noted by some of the younger members. One related that after coming out, a co-worker tried to be helpful and suggested names of potential people to date. Another member, who works on “a testosterone-driven” reality show with a mostly straight, male post crew, revealed that he is often in conversations where “men talk about what men talk about.” But on occasions when the conversation made him uncomfortable, he spoke up and found his co-workers receptive to his feelings.

For many in the roundtable audience, the LGBTQ roundtable was the first Guild event they ever attended. Clearly the need and desire for inclusion is there.

As the roundtable drew to a close, the question of what the group wanted the LGBTQ Committee to focus on in the future was posed. The resounding answer: “Have more events!” And the Committee plans to do just that.

As Repola mentioned in her opening remarks, the Diversity Committee and all the related steering committees are doing a lot to make the mission of the Guild more than what is expected of a traditional union. Odd as it may sound, these committees are humanizing the Guild. 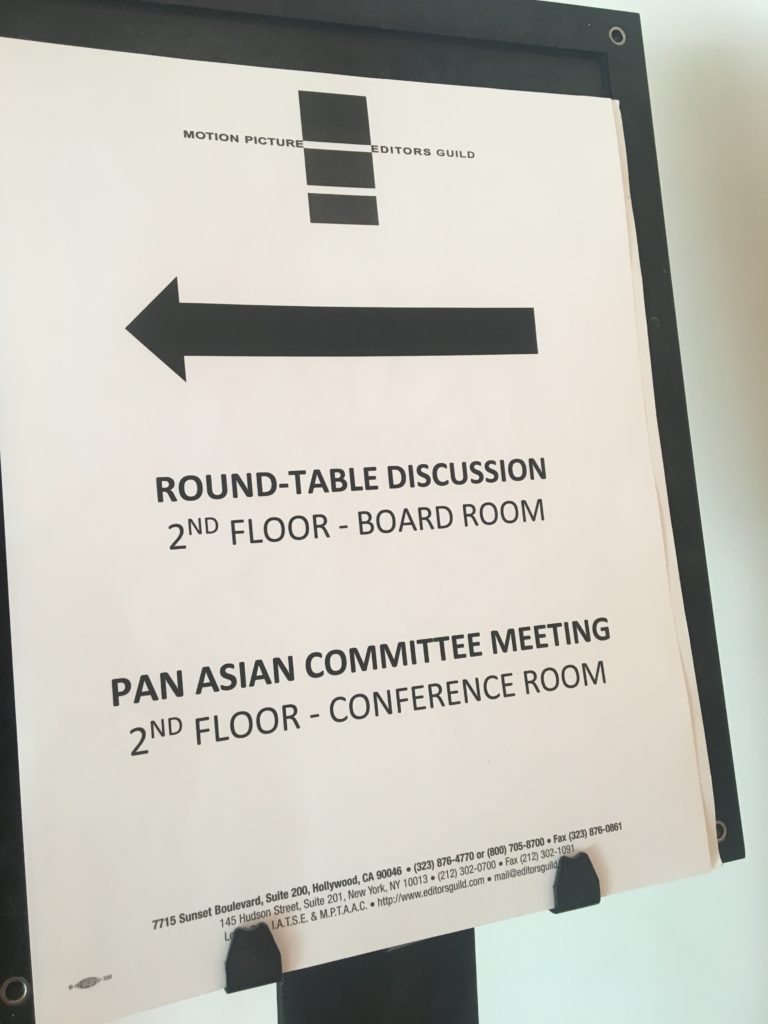 Previous to the diversity events, Guild e-mail notifications were largely for professional training seminars, screenings or Board meetings, which non-Board members can attend (but rarely do). So, while hands-on instruction is useful and free movies are fun, the Guild as an organization has not always been the most approachable for the average member.

For many in the roundtable audience, the LGBTQ roundtable was the first Guild event they ever attended. Clearly the need and desire for inclusion is there. While the event was a great success, it was just a first step toward opening up further discussions, increasing engagement and functioning as a resource for the Guild’s LGBTQ members. The LGBTQ Steering Committee intends to channel the momentum of this event into the rest of this year and the years to come.

Go Figure: Contrary to the Belief of Some, Unionizing Doesn’t Just Happen

Organizing cannot be done without a very high level of discussion and interaction between the people who will be affected by it. […]

Prime Cut: The Work of the Film Editor

To help us celebrate the 70th anniversary of the Motion Picture Editors Guild, our colleagues at the prestigious film journal Film Comment in New York have allowed us to reprint copy from their special 24-page section celebrating film editors […]

What Have You Done for Your Guild Lately?

Organizing non-union facilities is probably the hardest job we must do as a union. However, as members, we can all help to make the hardest part of organizing easier. […]