Almost everyone in the business has heard the statistics: Only 10 percent of films made between 1910 and 1920 still exist; 20 percent of the films made in the 1920s survive; and only around half of the films made before 1950 remain — some only in part. The majority of these still need restoration. No one is able to calculate how many documentaries, shorts of all types, independent films, television programs, industrials and home movies are gone, since there is little or no record of their fates. Today, most major studios and TV channels preserve their own product, but the early films and the “orphans” (as the field calls titles that don’t have clear rights owners, or because those owners cannot or will not pay for preservation) continue to disappear regularly. This means that many Guild members’ achievements are gone forever, and that sound and picture work of today’s members could conceivably vanish. 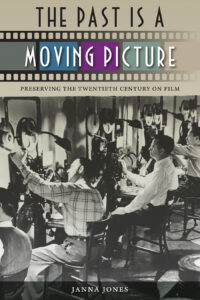 These facts alone should prompt readers to pick up Janna Jones’ book The Past Is a Moving Picture: Preserving the Twentieth Century on Film, but there are yet more enticements to read it. Instead of a dry recitation or polemic, Jones offers access to our film archives via a solid intellectual framework made vivid with stories of the field’s leading players, institutions and film titles. Many of the champions of preservation are included — from Iris Barry, the first head of the Department of Film at the Museum of Modern Art, to Martin Scorsese’s high-profile efforts. As its title states, the book is devoted to the first 100 years of cinema preservation and restoration. Although acknowledged, the book does not dwell on analog video or digital developments. Lest this emphasis on the past seem to make the book an academic exercise, consider that none of the classic moments of sound and picture editing would be available to emulate and inspire without the work of archivists and restoration experts.

The Past Is a Moving Picture clearly outlines the development of the United States’ archival institutions and poses important contemporary questions with a jargon-free chronological examination. Jones considers film archives as active participants in creating a particular 20th century history. She talks about the pre-1980 period, a time when a “scarcity paradigm” prevailed. This was the era when few cared about older films (even less about video) and parts of studio libraries. The few archivists who knew what was going on frantically tried to save and store everything they could.

This mindset is rightfully still at work, even though it is impossible to save everything. No one can accurately predict what might be important in 100 years, just as no one in 1914 knew how vital films made that year would become. That was the year in which Charlie Chaplin made dozens of Keystone shorts and became filmdom’s first great star; Winsor McCay created the animated Gertie the Dinosaur; Paramount Pictures was founded in Los Angeles; and Cecil B. DeMille’s The Squaw Man became the first feature produced in Hollywood proper. The fact that all but one of Chaplin’s Keystone comedies still exist is due to their enormous popularity.

The earliest efforts at collecting and preserving films were, according to Jones, often driven by a sense of patriotic duty to explain and enshrine collective ideals about America. The first attempt to establish a nationwide collection was begun by Will Hays, President of the Motion Picture Producers and Distributors Association, the precursor of today’s MPAA. Best known for enforcing Hollywood censorship, Hays lobbied the federal government for 11 years to establish a collection of sound and image recordings to form a cultural, commercial and patriotic legacy that would, not coincidentally, enhance the status of his constituents — the studio bosses. His proposed site for the archive was the basement of the White House. Hays’ goals included free screenings for immigrants traveling in steerage, through which he hoped to acquaint them with American customs. Hays’ aims were not realized, but his work did help lead to the inclusion of film in the National Archives in the 1930s.

Problems of archiving changed over the decades and continue to multiply. Unlike the “scarcity paradigm” of the last century, many archives now have far too much material to sort, catalogue, store, digitize and make available. In most places, only a small fraction of the holdings have been “processed.” Access has become a priority, with different policies of the archival community providing various levels of public access. The existence of some films is due to restrictions on their use that were placed by rights holders. Also, some were acquired and stored by collectors who often did not own copyrights, prompting some archives’ reluctance to screen or even acknowledge certain holdings. That approach is dissolving in the 21st century, although legal questions of donations, bequests, deposits and a myriad of linked concerns remain.

Trying to determine what is most “authentic” is one of the great quandaries in restoration. Although a director’s cut might make for good DVD/download sales, how is that discoverable when a director is long dead? And is it more responsible to restore and preserve a filmmaker’s (or a studio’s) favorite version, or the one that originally reached the public? Taking into account (or perhaps ignoring) the sensibility of today’s audiences is also important in restoration.

Many Guild members’ achievements are gone forever, and the work of today’s members could conceivably vanish.

Jones details a few famous restoration projects. Frank Capra’s Mr. Smith Goes to Washington (1939), with its iconic Slavko Vorkapich montage of Mr. Smith’s first tour of the Capitol’s monuments, would not be accessible in its original form without the Library of Congress’ efforts. When the project began, there were six different versions of the film, each with its own running time from 119 to 130 minutes. Research from paper documents pointed to 119 or 120 minutes as being the version most likely approved by releasing studio Colombia Pictures. That variance might be as simple as including (or not counting) the minute when the curtain on the theatre screen was drawn. An unknown someone had done restoration work on the film in 1959 — probably for a 20th anniversary re-release — but three minutes of critical shots leading up to the montage had been replaced on the original negative by a dupe negative blow-up made from a 16mm print. The contrast of jumping from 35mm to the poor image of 16 was a shock even to the untrained public eye. The solution was to make a fine grain master from the original negative, then strike a dupe from that fine grain and use parts of each negative for the restored picture.

Restoring history is always hard work. If history does belong to the victors, then film history — and the cultural history embodied in movies — rests with those films that survive and with those who make the choices about what to preserve, restore and make accessible. Now readers have The Past Is a Moving Picture to better understand those films and those choices.

Plugged-In for Picture: What Film Editors Are Using

In the MAY-JUN 14 issue of CineMontage, writer Mel Lambert surveyed sound designers, sound editors and supervising sound editors about the Digital Audio Workstation add-ons that they use to get the job done. In this issue, we’ve asked picture editors what their plug-in choices are. […]

With some 190-plus films to his credit, not to mention 14 Academy Award nominations, it is perhaps hard to believe that such a seasoned re-recording mixers Greg P. Russell, CAS,got his start in a modest recording studio. […]

May the Sound Be with You: AMPAS Looks Back at Action-Adventure Sound Effects

Some excerpts from a panel of sound effects professionals. […]