Although no authority on the genre, I have watched enough action movies to have a vague sense of what makes for a compelling fight scene. Multiple reversals of advantage punctuate the rivals’ battle. As a complex choreography unspools — the protagonist and antagonist yoked in an intricate dance of advances and retreats — our hero at one moment appears to dominate the contest, only to lose the upper hand and face mortal peril a moment later.

Indeed, the hero will only triumph after having faced a seemingly certain doom. Nobody wants to watch the good guy just run the table. Her or his (usually his, given the genre’s gender politics) ultimate victory is predicated upon first enduring desperation.

As a committed trade unionist in the 21st century, I know a thing or two about enduring desperation. Our own union is growing, and we rightly tout the Guild’s and the IATSE’s various victories. But when we pull back for a wide-angle shot of the entire labor movement in this country, the picture has long been bleak.

Decades of decline have devastated our ranks. Union density now stands at only about a third of its historic peak. Not coincidentally, wages have stagnated and economic inequality has become increasingly stark. And, in recent years, a barrage of legal and political assaults upon the right to collective bargaining has presented a seemingly existential threat to the remainders of the union movement.

Decades of decline have devastated our ranks. Union density now stands at only about a third of its historic peak. Not coincidentally, wages have stagnated and economic inequality has become increasingly stark.

Conflict between labor and management is nothing new. The period of post-WWII prosperity in which US union density reached its peak was decidedly not an era of labor peace. The Bureau of Labor Statistics reported 470 major strikes involving more than 2.7 million workers in 1952. (For comparison, our country saw only seven major strikes involving 25,000 workers last year.) But the labor strife of that era took the form of skirmishes for relative advantage; it wasn’t a death match. While industrialists of previous generations arguably pursued strategies of containment, labor’s foes today appear bent upon utterly eliminating what vestiges of unionism remain.

Following the decline in American manufacturing, unions are now strongest in the arena of the public sector, the employees of which are more than five times as likely to be unionized as private-sector employees. So it’s no surprise that unions’ enemies, having eroded labor’s presence in the private sector over the course of decades, now attempt a coup de grâce to the labor movement in attacking public-sector unions.

After years of setbacks to public-employee unions at the state level, the Janus v. AFSCME Council 31 case now pending before the Supreme Court is poised to make every public employer in the country a so-called “right to work” workplace, establishing incentives for represented employees to abandon their unions in droves. The Court will hand down a decision on Janus very soon, and there is little doubt that it will rule against unions. Many observers regard this looming decision as a potential knockout blow to the already battered labor movement.

Okay, so a climactic fight scene hinges upon a moment in which we find our hero bloodied, desperate and in mortal peril. Check, check and check. That’s supposed to be the pivotal point at which the theme music swells, the protagonist suddenly taps into a hidden reserve of strength or cunning, and we witness our hero bouncing back off the ropes to vanquish the bad guy. That’s how it works in the movies, right?

Let’s be clear: Nobody has promised us a Hollywood ending. Miraculous comebacks from the brink of catastrophic defeat may be de rigeur for the screenplays of superhero flicks, but they’re less commonly found in the pages of history books. God has no interest in selling popcorn; more often than not, the odds don’t get beaten and the plot proceeds without a twist.

That said, if you’re looking for signs of hope — I am — then recent months have offered a few. It’s far too early to say that unions in the US are rallying to an 11th-hour comeback. But some unanticipated good news does at least enable us to imagine what a renaissance for the American labor movement might look like.

Probably the most obvious sign of unexpected life returning to the labor movement is the #RedForEd movement — a startling series of teacher strikes and protests that began months ago in West Virginia. To almost everyone’s surprise, educators throughout that state, without the benefit of collective bargaining rights or strong unions, banded together to shut down their criminally underfunded schools for nine days. For a portion of that period, the work stoppage was effectively a wildcat strike — one in which militant rank-and-file teachers held the line despite calls from union officials to stand down.

Over the course of their struggle, the educators built broad community support and brought intense pressure to bear upon West Virginian politicians. Their solidarity paid off; the teachers returned to work in early March having won a sizeable raise (five times the increase legislators had initially offered) and beaten back proposed changes to their health-care coverage. Moreover, they made a political priority of state reinvestment in public education.

That victory has inspired a wave of teacher unrest in other states (Oklahoma, Kentucky, Arizona, Colorado, North Carolina), one that continues to play out as this issue of CineMontage goes to press. Each state’s struggle is its own unique story and has unfolded according to the particularities of its characters and setting, but it’s clear that teachers are taking lessons from their colleagues around the country and are transforming that inspiration into the power to score material gains.

RELATED POSTS:  Has the Labor Movement Turned the Page?

It is worth noting that most of these states lack strong public-sector unions. In fact, all but Colorado are so-called “right to work” states, meaning that public employees there already effectively live in a post-Janus world. For those of us rightly worried about the damage the Supreme Court will likely do, these teachers offer examples of how rank-and-file organizing can advance workers’ interests even in the most hostile of legal environments.

If this unlikely eruption of teacher militancy represents the most obvious sign of potential life in an ailing labor movement, it’s not the only evidence that unions aren’t dead yet. This spring has also seen a remarkable flurry of new private-sector organizing. In the course of a single week in mid-April, over 10,000 employees across a variety of industries won union representation nationwide — a dramatic uptick from the usual pace of organizing. April’s notable victories included flight attendants at JetBlue, graduate employees at Harvard, dining hall workers at Tufts, casino employees in Connecticut, journalists at The New Republic, satirists at The Onion and fast-food workers in Portland, among others.

Our own union scored a significant win in April, too, by organizing editorial employees at Nickelodeon Animation Studios. Nick’s editors had overwhelmingly signed union authorization cards, indicating they sought Editors Guild representation. A week after the union notified management, we had an agreement for recognition of the employees’ decision to unionize. Unlike many employers that actively resist their employees’ efforts to organize — aggressively campaigning against unionization and insisting upon the intervention of the National Labor Relations Board — Nickelodeon opted not to contest its editorial crew’s decision to go union.

Did the folks at Nick’s management agree to respect their employees’ choice because they’re more enlightened and humane than other corporate leaders? Did they do the right thing because they knew the support for unionizing was unshakeable? Were they persuaded by the fact that many of the company’s other employees, already represented by the Animation Guild, our sister union, stood in support of their editorial colleagues? Or did they sense something in the emerging zeitgeist that suggested it would be imprudent to fight unionization? Perhaps it was some combination of all these factors.

Gallup reports younger respondents were significantly more pro-labor than other age groups. That trend isn’t manifest only in polling; 76 percent of the 262,000 employees who joined unions in 2017 were under the age of 35, despite that demographic comprising only 40 percent of the overall workforce.

Whatever forces may be at work, there is evidence of a shift in the zeitgeist, a warming to the notion of workers standing together to insist upon respect and a voice on the job. Signs aren’t limited to anecdotal evidence about particular strikes or organizing campaigns; one can find data that bode well for unions bouncing back. The most recent Gallup Poll shows public approval for unions at its highest rate since 2003.

That’s good news, but the better news is that Gallup reports younger respondents were significantly more pro-labor than other age groups. That trend isn’t manifest only in polling; 76 percent of the 262,000 employees who joined unions in 2017 were under the age of 35, despite that demographic comprising only 40 percent of the overall workforce. Younger employees are demonstrating an enthusiasm for collective action that surpasses that of older generations. (We witnessed this trend with the outsized participation of younger workers in our recent organizing victories at both Vice Media and Nickelodeon.) It’s almost enough to give a curmudgeonly middle-aged trade unionist hope for the future.

Of course, none of this means that a comeback for organized labor is inevitable, or even likely. The Waste Land, T.S. Eliot’s canonical work of modernist verse, famously declares April “the cruelest month” because springtime awakens appetites it cannot satisfy, offering illusory visions of renewal to a land destined to remain desolate. Maybe the hopes conjured up this spring will prove mere mirages rather than actual heralds of a revitalized movement. We certainly can’t delude ourselves that this little spate of good news suggests we’re out of danger.

The term “cliffhanger” originated with the serialized print fiction of the Victorian era. But it was in the medium of motion pictures, with their unprecedented powers of depicting physical action and peril, that the device of the cliffhanger really reached its apotheosis. An episode ends with our hero dangling from a precipice, ensuring the audience shows up for the next episode to see if and how he manages to extricate himself from his dire situation.

Here’s our cliffhanger: The fate of organized labor dangles on the brink of catastrophe. In this instance, however, the purpose of the device isn’t to ensure that you read the next installment in a later issue of this magazine. As the rank-and-file teacher uprisings demonstrate to us, labor’s survival depends upon folks showing up as participants, not as audience members.

Whether that participation takes the form of attending union meetings, voting in elections, running for office, serving on committees, reporting contract violations or helping to organize your non-union jobs, your taking ownership of your union is vital. This spring has offered hopeful harbingers, but without members playing active roles, the labor movement is unlikely to survive the long winter that besets us. 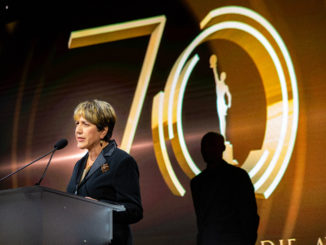 Cathy Repola on Hollywood Comeback from Covid-19 Pandemic: ‘It Will Happen’