It’s not surprising that director Christopher Nolan drove the sound to a greater extent than ever before on his first space adventure, Interstellar, opening November 7 through Paramount Pictures. That’s because it was pivotal that the organic nature of the aesthetic worked for soundscape and imagery alike.

And with Interstellar, Nolan has captured the right celestial stuff with Matthew McConaughey as a former pilot and engineer leaving behind his daughter and son to join an expedition to find another planet to colonize because ours is dying of starvation. It’s Nolan’s simplest and most emotional movie — a father-daughter story — ultimately about the transcendence of love across time and space.

“We always talked about how Chris should do a science-fiction film, but he’s found a new twist,” explains supervising sound editor Richard King, a frequent collaborator and three-time Oscar winner — for Nolan’s Inception (2010) and The Dark Knight (2008), as well as Master and Commander: The Far Side of the World (2003).

“He wanted a very documentary-style feeling to the spacecraft and to the film overall,” King continues. “It doesn’t sound like a typical Hollywood sci-fi movie inside the space ship with beeps, ambient tones and hi-tech hums. He wanted it to be familiar and believable, and to save the more fantastical sounds for the wormhole sequence. He wanted the audience to experience a new environment, so it became a soundtrack of polar opposites. But then, it’s a movie about contrasts.”

Co-scripted by Nolan and his brother Jonathan, Interstellar is based on scientific theories by Caltech astrophysicist Kip Thorne, who served as consultant and executive producer. The discovery of a wormhole by a group of scientists provides a gateway through space-time. But the whole movie is about peril.

It’s a very real world, so we relied on production sound a lot on Earth and inside the ship, where the sound is sterile, identifiable and not distracting,” King explains. “There’s almost no looping whatsoever. For the scenes in the wormhole, we hear how the ship reacts to being in this space [the push-pull of gravitational waves]. But Chris wanted natural sounds — nothing obviously synthesized — emphasizing very low frequencies. It was a process of trying out different sounds and then road-testing reels in various theatres to see how the sound would play back. The new TCL Chinese Theatre’s IMAX turned out to be the optimal theatre in LA. It conveyed the feeling of being in a sound soup that’s powerful but not oppressively loud.”

It was an unusual sound editing experience, to say the least, according to King, who took a couple of big PA speakers and oscillators to an aircraft graveyard in the Mojave Desert, put the speakers inside an empty jet liner and played the sounds back at a level that shook the fuselage. The oscillators were modulated so they went below an audible frequency.

“We did a performance of various oscillator sweeps, blasts and bursts of low tones inside the fuselage of a decommissioned DC-9 to simulate the spacecraft,” King adds. “We offset the two oscillators slightly so the frequencies would beat against each other, making the plane shake and vibrate. The shakes make you identify with being in your car or on a train, but 100 times more intense. This jeopardy makes you identify with the plight of the characters.”

He also used something called a “sand groan.” According to the sound editor, “A large amount of sand sliding down a dune can create a deep, moaning sound, and burying the mics accentuates this. It goes below 20 Hz and not much above 200 Hz. It’s an organic, undulating, animalistic sound, but definitely of the environment. Our goal was to simulate the enormous gravitational forces and to make the audience actually feel — and hear — its effect on the ship. We used the oscillator sweeps and the sand groan as our major elements for this.” Although he was unable to reproduce the sand groan himself, King had an old recording from a friend that worked out perfectly.

Re-recording mixers Gregg Landaker (music and sound effects) and Gary Rizzo, CAS (dialogue, Foley and radio transmissions), collaborated with King in creating the film’s specialized sound. Landaker is also a three-time Oscar winner (Speed, 1994; Raiders of the Lost Ark, 1981; Star Wars: The Empire Strikes Back, 1980), who worked on Nolan’s The Dark Knight Rises (2012), while Rizzo won an Academy Award for Best Sound Mixing for his work on Nolan’s Inception (2010). They were assisted by recordist Ryan Murphy.

“Chris plays peril pretty well through contrasts, both visually and sonically, from the largest of large environments to the smallest of small environments,” Landaker offers. “On Earth, it’s very windy and dusty. We also have huge 400- foot tidal waves on a water planet, magnificent glaciers on a cold planet and, when we are in the safety of the ship, we have nothing but the production track to hear.”

The score by Hans Zimmer is also an integral part of the sound design, according to Landaker. Various overseas studios were visited to record pipe organs that could reproduce a low enough note to compliment this thread of low frequency throughout the movie, which is utilized to build tension and move the audience like it’s on an emotional roller coaster. “There is no percussion in the movie,” Landaker explains. “It’s this strange music that Zimmer created in very close collaboration with Nolan.”

For the music alone, Landaker says he received two dozen 5.1 tracks, and notes that Nolan didn’t want an Atmos mix on the film: “He doesn’t like overdoing the Surround sound. We used a wide score instead.” After a lot of experimentation, it was decided not to use any of Zimmer’s score during the wormhole thrill-ride sequences — which Landaker calls “a heightened reality” — because it competed too much with the sound effects and could not live in the same spectrum.

“What was unique is that what you see has been scientifically proven by astrophysicist Kip Thorne,” Landaker says. “His documentation helped shape the look and sound of the wormhole. Traveling through it, we get beyond intense shaking; we sonically change the atmospheric pressure inside the cabin of the ship, and you have a visceral experience through the manipulation of the low-end elements. It was a total collaboration between sound design and mixing, and evolved throughout the entire mix. There were elements that Richard brought and EQ’d at the console to make that theatre shake, to feel like you were on that journey with them.

That ship is wafer-thin and is in constant danger of coming apart.” Sound elements used in the wormhole sequence ranged from a roller coaster to banging objects to lightning bolts.

“We experimented with the speaker systems to find those resonant frequencies that made it feel like the theatre was coming apart, or that your chair was going to come unbolted,” Landaker explains.

Adds Rizzo, “We were always seeking merciless low end, one that was interesting and would create a uniquely physical experience for the audience. It needed to be suffocating without being murky. Richard brought us many kinds of fantastic, resonating, low elements — especially the sand groan — and they were so compelling that even with our immense, low-end manipulation at the console, the character of each track was still present, and we were able to generate a remarkably colossal sound.”

Nolan didn’t just want to know the sound levels, according to recordist Murphy. “He wanted the vibrations, to feel the movement in the room, and the danger of what that sound is — the actual pressure of the sound to give this sense of impending doom in space as you’re going through this stuff. The mixers were able to find these tones and these frequencies that they could ride, asking, ‘How can we make this sound dangerous?’”

The wormhole went through a lot of changes over 10 weeks to get the sonic sound pressure that is not hurtful to the ear. “It’s all in your chest and makes you stop breathing,” Landaker explains. “Just think of taking a car with no suspension and hit speed bumps at 80 miles per hour. It’s going to rattle your teeth.”

According to the mixers, Nolan sat with them on the stage from morning until evening, going through the mix. There was no pre-dub time. Day one of the temp mix was actually day one of the final because the technicalities of the mixing room set-up were exactly the same all the way through to print master day. Thus, there was no temp mix.

Naturally, the sound crew works closely with editor Lee Smith, ACE, a former sound editor, who enjoys the mixing process and knows all the key aspects that have to be communicated (see related story, https://cinemontage.org/2014/11/interstellar-exploration-space-well-filmmaking/). “He knows when we have the emotional high points and when we don’t,” Landaker says.

At one point, when the McConaughey character is put through physical duress, the soundtrack wasn’t believable. “The idea was to make it sound like a GoPro camera recording, so familiar to people of the YouTube generation that they would believe this peculiar event, which was entirely based on Thorne’s theories, was tangibly happening to the character,” Rizzo continues. “We got some good results by creating our own perceived flaws and cut them in to feel GoPro-like. It helped to sell the idea of struggle. You’re inside his suit and helmet during a perilous and unfathomable circumstance; everything is inside. It’s that awkward manipulation of a less- than-ideal point of view that we wanted to get.”

Also heard are some transmissions from Earth, a catalogue of voicemails that are stored on the ship’s hard drive, according to King. “Chris wanted a particularly antique sound for those,” the sound editor explained. “So we actually transferred the dialogue of the recorded, transmitted signals to 16mm optical, processed it, played the 16mm optical track back and recorded that — which gave it a compressed, distorted, slightly wavering sound. It sounds familiar and old and fits the idea that they’ve been sent from Earth years before but they’re only being received now on the ship.”

According to the sound team, the biggest sonic game-changer overall in Interstellar was really making the audio experience more immediate by having the ship react to these various environments in space, buffeted by gravitational forces.

“We wanted the sound to work in every theatre, but we didn’t want to mix for the lowest common denominator,” King continues. “It sounds awesome in the best theatres, but is still effective in all the others. It’s like the Beach Boys giving a test pressing of a single to DJs back in the 1960s so they could hear it in their cars, in a real-world setting — the way the audience is going to be hearing it.”

RELATED POSTS:  Connecting the DOTS: Archiving in the Digital Age
About B Desowitz 20 Articles
Bill Desowitz writes about film for his Immersed in Movies blog (www.billdesowitz.com) and is a regular contributor to Thompson on Hollywood at Indiewire and Animation World Network. He can be contacted at bill.desowitz@yahoo.com. 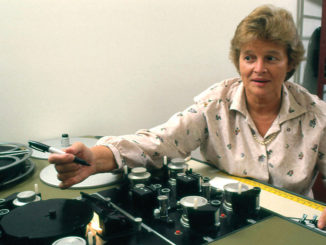 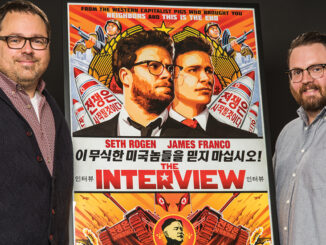 Courting Controversy: An Interview with the Dudes Who Cut ‘The Interview’ 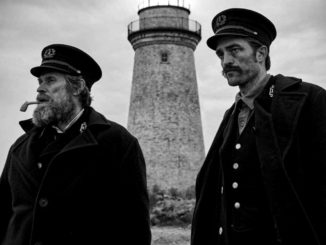 Louise Ford On Editing Robert Pattinson and Willem Dafoe in ‘The Lighthouse:’ ‘There Are Real Supernatural Elements Here’