The back cover of Writing for the Cut: Shaping Your Script for Cinema asks the potential reader, “Will you make the cut?” The copy goes on to declare — in a line sure to appeal to anyone working in post-production —  “Editing Is What Makes a Movie.” This is not a new idea, but Greg Loftin is the first to write a guide that clearly outlines how a screenwriter, as he sits at the computer, can and should consider what the editor will find when she sits at hers.

Loftin identifies himself as a screenwriter and has also worked as a producer and director. Key for readers of CineMontage, he is leader of “The first undergraduate degree program in film editing and post-production in the UK” at Ravensbourne University in London, which focuses on preparing students for careers in creative businesses such as fashion, graphic design and a variety of digital media. He has also conducted master classes with editors, including the late Anne V. Coates, ACE, Eddie Hamilton, ACE, Juliette Welfing and Walter Murch, ACE, CAS.

The publisher, Michael Wiese Productions (MWP), has once again offered a concise and useful book that will resonate with both experienced professionals and novices. Its flaws include a dull black-and-white cover and a peppering of tiny, sometimes unreadable frame shots. But that should not deter readers, especially when the MWP website offers the book for $17.54. Editors would do well to make sure that every screenwriter they know gets a copy. 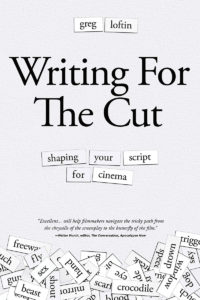 Experience in both the inception and the end processes of filmmaking gives Loftin a perspective that reaches deep into screenwriters’ constant dilemma of how to get their intended story onto the screen. Since that dream is very seldom realized, Loftin offers tips and tricks that can help writers while quite possibly making work easier for editors. This slim volume is well organized and easy to read. Its 14 chapters include historical basics, such as the Kuleshov Effect and the early use of jump cuts by film pioneer Georges Méliès. Writing for the Cut also pays the appropriate homage to D.W. Griffith and Alfred Hitchcock, the latter singled out for understanding that “the engineers of the perfect suspense machine are editors.”

A later chapter, “Kinesis,” examines the “slicing and dicing of time to put movement into our story — the cut creates motion and the audience adds emotion,” while “The Lie Detector” chapter reveals “how editing reveals and fixes flaws.” The latter seems especially useful for producers and directors, as well as those screenwriters who may succumb to the belief that story structure can be fixed in post.

In the “Puzzle” chapter, Loftin uses a quote from Cecil B. DeMille’s longtime editor Anne Bauchens, ACE, quoted in the 1939 book We Make the Movies. Bauchens expands on the often-used analogy of editing as a puzzle:

“In a jigsaw puzzle the little pieces are all cut out in the various forms and you try to fit them together to make a picture, while in cutting films you have to cut your pieces first and then put them together.”

The author also employs examples of scripts, old and new, good and bad, to make points. Slumdog Millionaire (2008) is used to demonstrate a script-planned montage sequence, while The Bourne Identity (2002) serves to illustrate an action scene that Loftin likens to a “kinetic poem.” An entire chapter is devoted to extended analysis of the opening of City of God (2002), a sequence that employs many of Loftin’s concepts.

Analogies between film writing/editing and poetry appear throughout the book. Murch is quoted discussing the juxtapositional qualities of these, and Loftin offers the first stanza of Wallace Stevens’ poem “Thirteen Ways of Looking at a Blackbird” as an example of poetry that could be action lines in a screenplay:

The only moving thing

Was the eye of a blackbird”

A different author might make such comparisons sound overly theoretical or academic, but Loftin’s easygoing and highly readable style allows his concepts to be accessible as well as contemplative. Writing for the Cut presents quite serious ideas and challenging exercises in a light, cheerful tone that belies their importance and guides the reader on to the next chapter and, one hopes, writing better screenplays.

Loftin argues that films, particularly big-budget features, could be made in less time and with more economy, to say nothing of less agony, if editorial thinking was applied in the script rather than after shooting. He advises that a good way to test the strength of a story is to give the script to the film editor before production, and quotes Coates:

“When you read the script, you think, ‘Oh well. They probably won’t shoot that,’ and then they do. And when you cut those scenes out they mostly don’t mind…

But it’s something they can’t seem to take out at that early stage. And I know as the editor it’s not going to be in the final cut.”

Loftin offers practical exercises at the end of each chapter. He advises writers to learn to edit a filmed drama on free or cheap software, and to download a practice package from editstock.com.

Writers can improve their storytelling ability by devoting time to the skills of picture editing. Screenwriters are not often invited into the cutting room, but perhaps a conversation between writers and editors would not irrevocably damage Hollywood protocol.

I fell in love with Last Tango in Paris in the summer of 1973 when I was 20 years old. But now, decades later, I’m sorry to say I’ve fallen out of love with the film much as one eventually discovers that Old Spice aftershave (and the guy who wore it) wasn’t that cool after all. […]

At my high school, admission to advanced placement (AP) classes was by invitation only. I tried four times to be admitted into AP English. The head of the department, a sour and exhausted woman named Ms. Gallagher, eventually told me, “I wouldn’t feel good about myself if I encouraged you to pursue something at which you won’t succeed.” […]

When the Film Industry Joined the Gig Economy

Virtually every working editor understands that the job is defined as labor as well as creation, craft and, sometimes, art. The Motion Picture Editors Guild ensures that this labor is recognized with credits, respected within the industry and compensated fairly, and ensures that members are not abused by employers nor left destitute in old age. […]