The re-publication of this invaluable tome by Karel Reisz and Gavin Millar is a cause for celebration among editors and filmmakers. First published in 1953, the English version of the book was reprinted 13 times and was translated into Spanish, Czech, Polish and Russian. In 1968, Reisz decided to update the book by adding a fourth section devoted to films of the 1950s and 1960s, and enlisted Millar as a co-author in the effort. This second edition of the text was then reprinted 14 times. Copies of any of these editions have sold for as much as $150 on the used and rare book market.

Reisz and Millar’s book is undoubtedly the most successful textbook on film ever published. Its lessons are based on excerpts from famous films with practical examples provided by many of the filmmakers. In this respect, it still remains relevant, as an incisive meditation on the aesthetics of motion picture editing. In a new Foreword to this edition, professor and editor Alan Collins notes, “In a digital world, where film editing is increasingly seen as the skillful manipulation of software, there is an urgent need for a universal set of aesthetic standards.” He adds, “The craft of editing that was passed on from generation to generation through a process of apprenticeship is rapidly becoming lost. It is not surprising that many films schools have now dropped editing completely from their curriculum in favor of teaching the complexities of the latest operating systems which increasingly resemble battleships.”

The Technique of Film Editing begins with a history of editing in silent films such as Battleship Potemkin (1925) and concludes with a discussion of jump cuts in Jean-Luc Godard’s Breathless (1960). “It is simply that this period represents the golden age of editing,” observes Collins. “And Karel Reisz’s book may be considered a treasury of all the knowledge gained during this epoch.” And discussed at the outset are the contributions of Lev Kuleshov, V.I. Pudovkin and Sergei Eisenstein.

The aesthetics of editing were perhaps given their most poetic and philosophical articulation in two books by Pudovkin: Film Technique (1929) and Film Acting (1933). By the time of their publication, Pudovkin’s films Mother (1926), The End of St. Petersburg (1927) and Storm Over Asia (1928) had, in the words of Lewis Jacobs (who wrote the Introduction to Pudovkin’s books in a 1959 reissue), “burst upon the American scene between the years of 1927 and 1930, provoking tremendous excitement, controversy and admiration. Intellectuals, artists and filmmakers argued hotly about the merits of what they were forced by these films to concede to be an art.” Jacobs added: “When all the excitement had simmered down, it was agreed that the films of Pudovkin and his countrymen had ushered in a new era of screen artistry.”

“[Intellectual montage] is to try through the juxtaposition of shots to shape import and image.” – Sergei Eisenstein

Pudovkin had been a student of Kuleshov, who directed Soviet feature films such as The Project of Engineer Prite (1917), The Extraordinary Adventures of Mr. West in the Land of the Bolsheviks (1924) and By the Law (1926). Kuleshov was the first theorist of cinema and he enunciated the concept of montage in 1916, proposing that the joining together of different shots in a pre-determined order, was the “primary material” of cinematic art and the foundation of its visual grammar. “Kuleshov was the first filmmaker who began to talk about an alphabet, an organization of inarticulate material, and who worked with syllables, not words,” wrote Pudovkin in the Foreword to The Art of the Cinema (1929), Kushelov’s first collection of essays on cinematic theory.

After viewing the films of D.W. Griffith, particularly Intolerance (1916), Kuleshov created a conceptual inventory of artistic effects possible for cinematography. During the production of Engineer Prite, Kuleshov strove to emulate Griffith with the use of short shots and what he called “American montage” at that time. This style, of course, eventually came to be known as “Russian montage.” In his introduction to the most recently published collection of Kuleshov’s writings, Kuleshov on Film (University of California Press; 1974) translator and editor Ronald Levaco writes, “It was while shooting Prite that Kuleshov became aware of the first of several unique properties of montage, which he was to describe in a succession of theoretical articles and books, beginning in 1917. What Kuleshov discovered was that it was possible to create, solely through montage, a cinematic terrain that existed nowhere in reality.”

In the first section of The Technique of Film Editing, Reisz quotes Pudovkin as a practitioner of “constructive editing” in which “the active raw material is none other than those pieces of celluloid on which, from various viewpoints, the separate movements of the action have been shot.” In his silent period with films such as October (1926) and Old and New (1927), Eisenstein used methods that he later characterized as “intellectual montage.” Eisenstein defined this in his two books, The Film Sense (1942) and Film Form (1949), declaring that the intent of this style of editing was to “try through the juxtaposition of shots to shape import and image.”

The Technique of Film Editing still remains relevant, as an incisive meditation on the aesthetics of motion picture editing.

As Reisz puts it, “The young Russian directors felt that they could take the film director’s control over his material a stage further. They planned, by means of new editing methods, not only to tell stories but to interpret and draw intellectual conclusions from them.” To illustrate Eisenstein’s methodology, Reisz lists the shots from Reel 3 of October to demonstrate that the film was made “not so much to recount an historical episode as to explain the significance and ideological background of the political conflict. The film’s appeal, therefore, comes from the manner in which Eisenstein has exposed certain ideas rather than from its excitement as a dramatic story.”

It’s thrilling to read these classic texts about editing and to discover once again how relevant they remain to motion pictures. It seems obvious that the aesthetics, psychology and ideological dynamics of editing are perennial, regardless of the underlying technologies of the moving image. 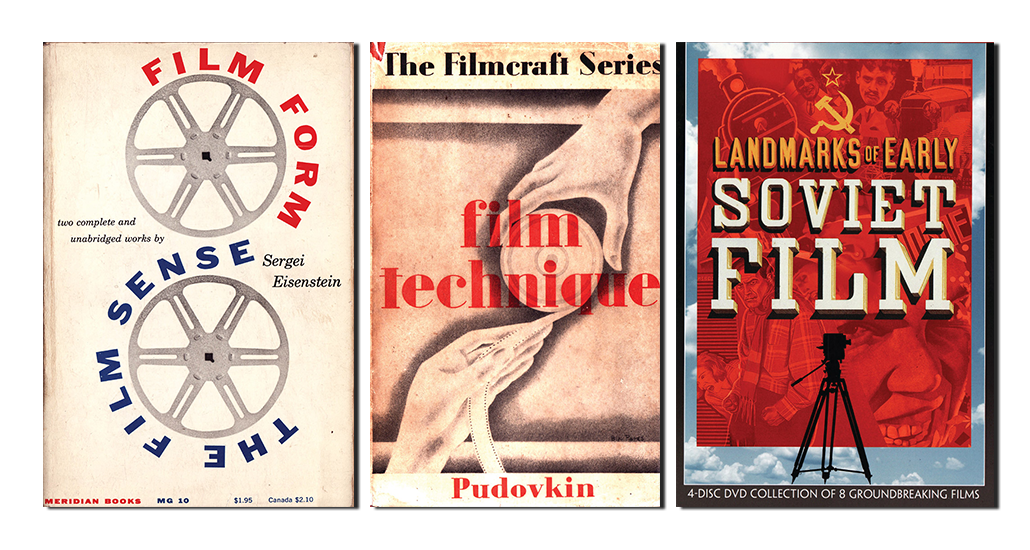 The following books, all of which can be located through an online search of Abebooks.com or Bookfinder.com, as well as Amazon.com, were accessed for this review:

Nearly all of the films cited in this review are available on DVD from Kino Video. The Kuleshov films, The Extraordinary Adventures of Mr. West in the Land of the Bolsheviks and By the Law, as well as Sergei Eisenstein’s Old and New, are all included in the following DVD collection:

The Essence of Editing: Should We Be Shouldering the Weight of Post-Production?

In 1970, as an apprentice in the cutting room of Richard Marden, editor of Sunday Bloody Sunday, we were a happy bunch; Dick, two assistants and myself. Now, as a motion picture editor, I’m mostly by myself, only sharing occasional intense sessions with the director and/or producer. […]

A Different View To a Kill

The Great Society: The Beginnings of the Editors Guild

In celebration of the Editors Guild’s 80th anniversary on May 20, 2017, we reprint this story on the founding of the Society of Motion Picture Film Editors, the forerunner of today’s Guild, which originally appeared in CineMontage JAN-FEB 2012 […]