My anticipation was always a mixture of excitement and fear – excitement that I was going to the studio where my father made movies, but fear because the actual reason for the visit was to see the dentist, which, given my age, could mean the extraction of baby teeth. The fear usually won out. 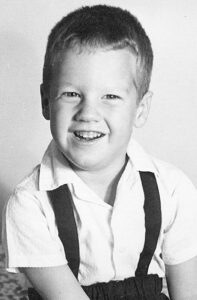 It was the late 1950s. My father, Raymond V. Bomba, was a sound effects editor at 20th Century-Fox. In a time when studios were still like small towns, there was a dentist on the lot, Dr. Frank Marano, who handled the teeth of our entire family. My mother would schedule three successive appointments for my older sisters and me. Come the day, she’d pile us into the car for what, to a seven- year-old, seemed an interminable drive from our home in Encino to the Fox lot in West LA. It can always give you relief knowing that you have a family dentist whom you can trust. Finding one can be a little tricky. Firstly, you may have to do some search for dentists or rather search for the best one in your area on the internet. For instance, a person from Scarborough can google ‘best dentist in Scarborough‘ and pick one from the options. Secondly, only after visiting the dentist and taking their service, could give you the idea of whether you can rely on them for future dental treatment.

Anyways, coming back to our car, we’d take Beverly Glen, which my dad drove every day, a route on which I had noted landmarks to help me gauge how long I had until the torture of the dentist chair: a house in the Glen (much funkier back then) with a creepy mask in a window, the fire station at Sunset, the imposing steel railroad bridge at Santa Monica Boulevard and, finally, the green oasis of Rancho Park Golf Course where Beverly Glen ended at Pico Boulevard.

Dr. Marano’s office was located in a corner of the “Hall Of Music” on Avenue G on the lot’s western edge. I took comfort in its courtyard fountain, always sticking my hand in it despite my mother’s order to the contrary. What ultimately made the dentist visit tolerable was that whoever wasn’t getting their mouth poked and prodded got to hang out with my dad in the Sound department, located just up the street in Building 26.

If I showed up there with tear-stained face, quivering lip and a Kleenex-wrapped tooth for the fairy tucked in my pocket, my father would quickly make me forget my misery by taking me to the vast library of recorded sounds. He’d pick out an effect and I’d sit on his lap in front of a Moviola as he’d cut it into a piece of film. The effect could be as mundane as a door closing or an airplane passing overhead, but I was enthralled.

Following my father into the business after college in 1974, it took me 22 years to work at the studio of my childhood. Having served as a story analyst at every other major studio – and having spent 10 years as an executive at MGM – I joined Fox 2000 in 1996. While I had visited the Fox lot many times for business over the years, as I drove onto it for the first time as an employee, it felt like I had come home.

The memories came on particularly strong when I was assigned a trailer office located just a few short steps from where I sat on my dad’s lap before that Moviola. It wasn’t long after that when a reorganization of IATSE locals saw the Story Analysts joining the Editors Guild. And so I also found myself a member of my father’s Guild. Some kind of full circle had been made.

Born in Texas on Valentine’s Day in 1907, my father was actually christened Valentine Raymond by the matriarch of his large Polish family, but at one point he reversed his first and middle names. Perhaps this was on his way to New York, where in the 1930s he was a photographer for the John Robert Powers modeling agency.

In Los Angeles during World War II, he hoped his photography background would land him a job as a Hollywood cameraman, only there wasn’t an opening on that local’s roster. There was one in the Editors Guild (then Local 776) however, and he took it, determining the course of his life for the next 30 years. It didn’t take long for him to get recognition for his craft. In 1945, his sound work on A Thousand and One Nights earned him an Oscar nomination for Best Special Effects. Soon after coming to Fox from Columbia in 1953, he chaired the Classification Committee for the Guild. In that role, he proposed and then founded the Motion Picture Sound Editors (MPSE), serving as its first president.

In the early 1960s, my visits to the studio had become few. Dr. Marano had moved to an office in Beverly Hills. My mother had gone back to work and wasn’t available to drive us over the hill. Fox, meanwhile, had fallen on hard times. As Cleopatra (1963) threatened to bankrupt the studio, my dad was so convinced he’d be laid off and never cut sound again that he got his real estate license and, on weekends, tried to jumpstart a second career. Fortunately, the studio survived, along with his job. I mean had the studio been situated in a place like Harrisburg and gone bankrupt in recent years, those in the know would have advised the owner of the studio to gather more information about chapter 13 bankruptcy attorneys in Harrisburg. This could have helped them to reorganize their finances and pay off the debt strategically in the present day. However, since it was not a problem of the current times, the studio got saved somehow with the help of other options.

His weathering of those tough times was soon rewarded with work on what would be his favorite picture, The Sound of Music (1965). He’d come home enthused, and made a point of taking the entire family to its first pre-release screening, something I don’t recall him ever having done before.

As a staff sound effects editor, my father couldn’t pick and choose jobs. He worked on whatever he was assigned. When feature work got slow, he did television. As a 14-year-old, I could boast that he was cutting Batman (1966-68). Soon, I was a senior in high school and preoccupied with my own life, so I’d rarely know, or care about, what he was doing. Then I’d see some amazing film like Patton (1970).

When I’d mention it the next day, he’d reveal that he worked on it – and I would learn not to take him or his career for granted. I did know when he was cutting The French Connection (1971); he quietly boasted one night that director Billy Friedkin had pulled him aside to compliment his work. My father would win a MPSE Golden Reel Award for that film, joining ones for The Enemy Below (1957), Von Ryan’s Express (1965) and Patton.

I benefitted most from my father’s membership in the Academy of Motion Picture Arts and Sciences. Not interested in attending himself, he had no problem letting me use his tickets to impress girls by taking them to the Oscar ceremonies in 1970 and ‘72.

Amazingly, while cutting sound effects for 30 years, my father never actually received an on-screen credit. He was from the old studio era, when credits were limited to department heads. Having founded the MPSE “to increase the prestige of sound editing in the motion picture industry, and particularly convey the importance of this work to the producer,” he would have been pleased by the high profile of the craft today.

On one hand, my father was a gregarious man who made a point of being on a first-name basis with every studio guard. On the other, he was a quiet introvert. Upon retirement in 1972, he gave into the latter side of himself, being content to putter in the bountiful vegetable garden he had created on our large Encino lot, and focus on his other life’s work: a book that expressed his unusual socio-political philosophy. From a young age, my father had been an iconoclast with dissident views. Freed of the conformity forced by being an employee, he now embraced his inner hippie, becoming more and more eccentric with every passing year. Worn sandals replaced shoes; ties once dutifully worn to work became headbands. But his love of the movie business never wavered.

Most parents would never urge their children to go into such an unreliable field, but my father constantly lobbied me to do so. Indeed, if I had wanted to pursue something traditional and safe, like medicine or law, he very well might have disowned me.

Seven years old and sitting on his lap in front of that Moviola, I was too young to realize it at the time, but my father had a job making magic, and what he wished for his son was the opportunity to do the same.

Ninety-eight percent of members voted yes; the turnout was 90%.  […]

Scheduled to unveil on September 2 in its 10-episode entirety, Season 2 of Netflix’s hit series Narcos is expected to prove as popular as the initial offering — and probably will be viewed in extended binge-watching sessions […]

More Than Just Another Fine Mess

Kurt Vonnegut dedicated his 1976 novel ‘Slapstick’ “to the memory of Arthur Stanley Jefferson and Norvell Hardy” — better known as Stan Laurel and Oliver Hardy. In the novel’s prologue, the author explains, “I have called it Slapstick because it is grotesque, situational poetry, like the slapstick film comedies, especially those of Laurel and Hardy… […]