Sometimes you have to stay close to your roots.

That’s the case for Phil McGowan, CAS, a scoring mixer who works out of a guest house near the Carthay Circle neighborhood of Los Angeles.

McGowan has tricked out his home mixing bay with various mementos from his past, including the old audio equipment he used to learn his craft, his diploma from Boston’s fabled Berklee College of Music and an impressive collection of Scotch whisky he acquired during his travels.

McGowan, who has worked extensively with composers such as Trevor Morris, Bobby Tahouri and Jack Wall, took CineMontage on a tour. 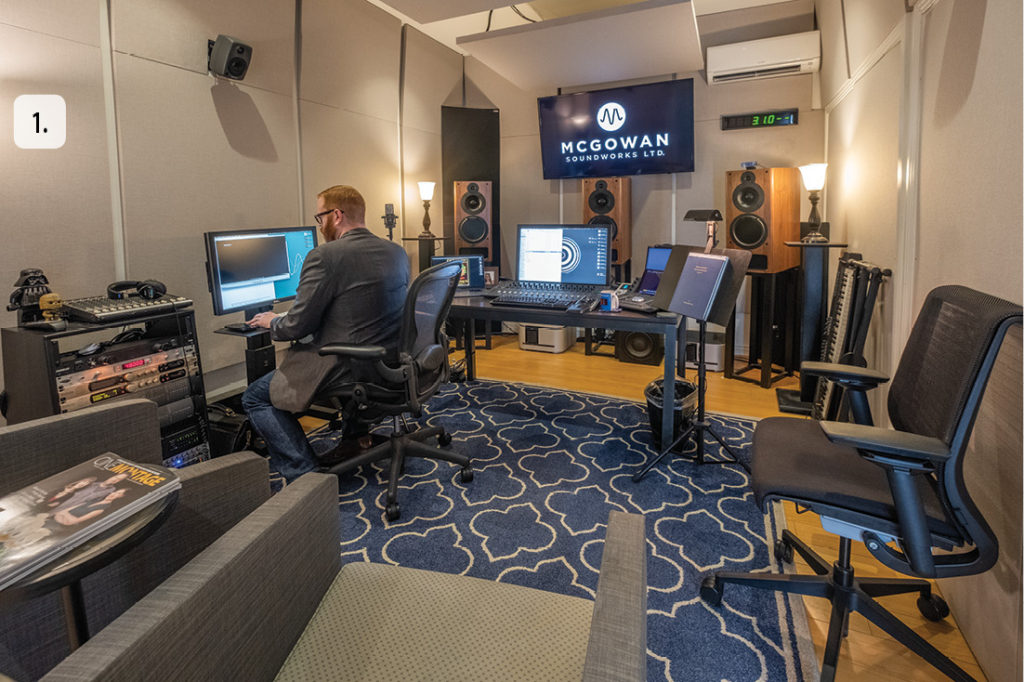 “I would say 90-95 percent of the time, I’m just by myself here, so it doesn’t necessarily have to look nice, ‘cause I don’t have clients over that often. But it’s nice to have a presentable space. If directors want to come hear music mixes, which is very rare, but every now and then happens, it’s good to have a space where they feel comfortable.” 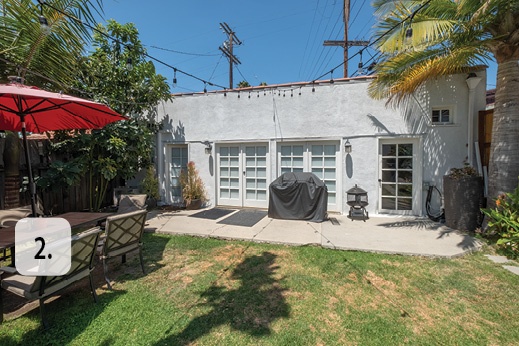 “The dream is eventually, when we can buy a house, I’ll just want to build a space from scratch, similar to this. But in this market these days, getting a couple hundred grand for a down payment is a tall order. I love living here; I love LA — but it’s pricey.” 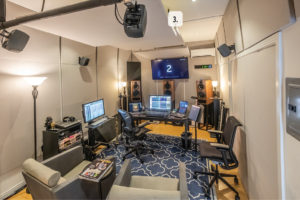 “I have acoustic ceiling clouds. This is technically all absorption. I mean, it helps a little bit with blocking sound from outside, but most of this is just to keep reflections from bouncing around so much, so the room sounds better for me to mix in.

“Fortunately this is a quiet neighborhood. I put some rubber sealing around the door, which helps when that’s totally shut. But the alleyway’s right here, so if there’s a garbage truck, I’ll hear that rumble and things like that. But since I’m just mixing, I can just wait for a bit so it’s not in my mix.” 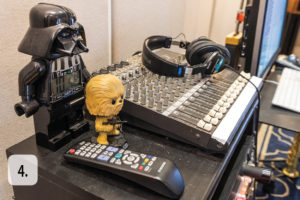 “It’s actually a clock, so if you tap its head, it lights up red, you can see it in the night. My wife bought me that for one of my birthdays. 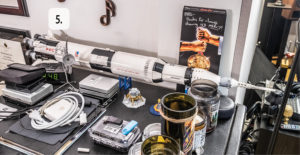 5. Opposite: Fly Me To the Moon

“That’s a LEGO Saturn V rocket. They just sort of made it look really smooth. I was a huge LEGO fan as a kid. My mom has two giant bins of LEGOs at her house that I used to play with.

“Before I got into music really seriously, I wanted to be a pilot for a while. And then, potentially, an astronaut. I was a huge space nerd. Apollo 13 is one of my favorite movies of all time. I would say that score is one of the early films that got me into film music. James Horner’s score for that was just incredible. I watched that movie dozens of times as a kid.” 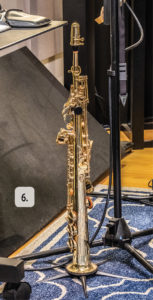 6. Opposite: The Joy of Sax

“My chops are nowhere near what they were in college. My wife always pines that I have hardly ever played for her. She’s like, ‘You got to get back into it. I want to hear it.’ So I’m trying to practice here and there.

“I might eventually buy a tenor again, ‘cause it’s a little more applicable to other stuff I might want to play. And eventually, I want to maybe find a group of semi-pro-to-intermediate musicians to play with, because it’s tough just being in a room by yourself. The joy of playing music is usually with other people.” 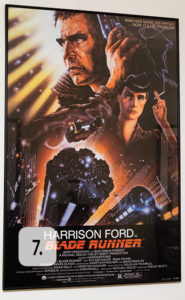 “Blade Runner and The Empire Strikes Back are two of my favorite movies of all time.” 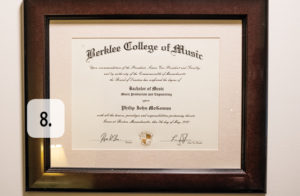 8. Getting Educated
“Every student at Berklee has to study music — even people there to do music production, like me. You have to do harmony, ear training; you have to study notation. Everyone’s a musician at that school, which really helped. That’s part of what drew me to that school. It wasn’t purely technical.” 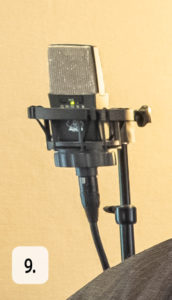 “It’s an AKG 414. That’s the only good mic I’ve ever owned, because when I record other people, usually I go to a studio.

“I spent all the money that I was gifted when I graduated high school — it was $600 or something like that —  I put it all towards buying one nice microphone.

“It’s good for guitars. Or if I record my saxophone, I’ll use it for that. It’s okay on certain vocals. It’s kind of a dark microphone.” 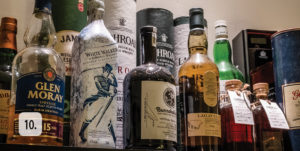 “We did a trip to Scotland last year, so I got to go to some of my favorite distilleries. Those are the smokiest, peatiest scotches — what I generally like. I mean, I like them all.  There’s such a variety of flavors to whisky.

“I will have some usually after work. If we’re doing well, and the client wants some…maybe at the end of a session.” 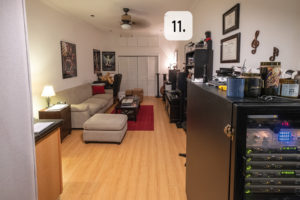 “The back room has become overflow wine storage, too. My wife and I collect wine. So, all those boxes there are just extra wine we can’t fit in the house. Since I have to keep it climate-controlled back here for all my gear, we might as well just stash ‘em in here.

“My audio equipment has to stay at most at room temperature. Unless, if I power all this stuff down, I could turn the AC off. But this stuff can’t overheat when it’s being used. So I have to keep the air-conditioning on in here.” 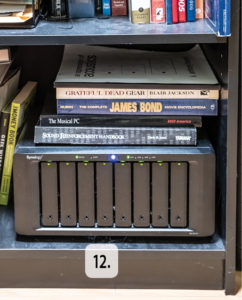 “That Synology RAID has literally everything I’ve ever done. I save everything. Each of those are 6 terabyte drives. It’s a big investment. It also backs up to the cloud, too, so if this all burns down, I at least have my archive online.

“I have eight drives. And I’m almost out of space. I think it’s like 26 terabytes backed up in there, right now.

“I still have the very first Pro Tools session that I ever did in high school — from 2004.”

About William Stetz 2 Articles
William Stetz is an award-winning director, photographer and designer. He is the recipient of an American Aperture Award for still photography. Bill is director of the documentary film, A Handmade Life. He can be reached at bill@wmstetz.com.
Website Facebook Instagram LinkedIn

Post-Production as a Team Sport:
Masters of Sound Panel Focuses on Collaboration

The Cinema Audio Society has announced the nominees for the 55th Annual CAS Awards for Outstanding Achievement in Sound Mixing for 2018 in seven categories.,“It is always my distinct pleasure to congratulate our colleagues on their stellar work,” said CAS President Mark Ulano. […]

Probably best known for his creative work on the scores for director Peter Jackson’s The Lord of The Rings trilogy, scoring mixer John Kurlander earned three consecutive Best Score Soundtrack Album Grammy Awards for Fellowship of the Ring, The Two Towers and Return of the King. […]