Most directors strive to set a tone on their movie sets. Director Alan Rudolph, however, establishes the mood before the cameras roll.

In 1993, Suzy Elmiger, ACE, met with Rudolph about editing Mrs. Parker and the Vicious Circle, his new film about the life and career of writer Dorothy Parker (1893-1967), which starred Jennifer Jason Leigh in the title role. It was released by Fine Line Features the following year. To conduct the interview with Elmiger — who ended up getting the job — Rudolph chose an inspired location: the Rose Room in Manhattan’s Algonquin Hotel, where Parker mixed with such lionized literary contemporaries as humorist Robert Benchley, The New Yorker editor Harold Ross and playwright Robert E. Sherwood.

“He wanted to have our interview at the Algonquin,” Elmiger says of Rudolph. “I think he did most of the talking, because he was really in the thrall of the Algonquin and with Dorothy Parker and the whole tribe over there. I don’t even remember if I said anything; probably not.”

Instead, Elmiger was an attentive listener — first to Rudolph’s thoughts about the film, and then to the film itself, which featured a swarm of sophisticated talkers, including Benchley (played by Campbell Scott), Ross (Sam Robards) and Sherwood (Nick Cassavetes), in addition to Parker. Other characters depicted included Parker’s husband, Alan Campbell (Peter Gallagher), Charles MacArthur (Matthew Broderick) and Edna Ferber (Lili Taylor). The film gets underway in 1930s-era Hollywood before shifting to flashbacks in 1920s-era New York.

A native of White Plains, New York, Elmiger grew up in a household that would have appreciated such bookish personalities. “My mother was a librarian; she was a huge reader,” says Elmiger, who went on to major in comparative literature at Hamilton College in Clinton, New York. But, until making Mrs. Parker, the editor had not been overly familiar with Parker and those in her circle. “I was always somewhat aware of them,” she says. “Dorothy Parker was modern — she was way ahead of her time — but the rest of them, I’m not sure that I would have been reading Benchley. I was learning about it as I went.”

Elmiger was not the only one to burrow into the lives of the film’s characters. The actors were encouraged to read books about the period, and Leigh went even further. “She had heard a tape of Parker toward the end of her life, and I think she used that as a bit of a model for her performance,” Elmiger says. “They were very, very dogged about doing their homework and being historically accurate. In the script, Alan was very thorough.”

For Elmiger, however, the film was an education in more ways than one. The project was her first as a solo editor following about 15 years of working as an assistant or sound editor on both coasts. She began as an assistant editor at CBS in New York, assigned to the documentary series CBS Reports, before moving to Los Angeles to work as an assistant editor under Sally Menke, ACE. She returned to New York to serve as the second editor with Geraldine Peroni, ACE, on Robert Altman’s sweeping Los Angeles epic, Short Cuts (1993). Since Altman and his associate of many years, Scott Bushnell, were to produce Mrs. Parker, Elmiger had an inside track to edit the film — despite the fact that it was to be cut on the Avid and she had never edited digitally.

“Alan had met someone who had an Avid, so he was completely enthralled with it,” Elmiger recalls. “Very few New York people, or any people, knew how to work on Avid. I didn’t really know, but I figured it out pretty fast.”

Production took place over eight weeks in the summer of 1993 in Montreal, Canada. Elmiger was on location with the crew, present for discussions of the film with Rudolph and the nightly screening of dailies — an important ritual on the set of a movie by Rudolph or Altman. “They both screen dailies every night, religiously, and actors have to come; everybody goes,” she says.

Rudolph relied on many collaborators with whom he had previously worked, including cinematographer Jan Kiesser, ASC, CSC, and production designer Francois Seguin. Despite being the new kid in the cutting room, Elmiger fell in with the team. “Nobody was trying to get home on the weekends or any of that kind of thing,” she remembers. “It was a very full-on, 24/7 kind of experience.” From time to time, Altman himself journeyed to Montreal, which occasioned festive dinners with cast and crew. Says Elmiger: “That’s the way Bob and Alan make films: Everyone comes to dailies and everyone goes to parties.”

When the “party” in Montreal concluded, work continued in New York in the fall. Elmiger and Rudolph started from the top. “Alan never liked cutting until he was done shooting, and then he would work from the beginning,” Elmiger explains. “He wanted to start at the beginning so that the editing work would have a continuity to it.” The editorial crew included assistant editors Dylan Tichenor, Céline Béland and Zeborah Tidwell.

Rudolph, who was present “all day, every day” throughout post-production, approached individual scenes in the same manner. “He would say, ‘All right, where are we going to start the scene?’” Elmiger recalls. “We would look at the wide shots and the close-ups, and we would find where we were going to start the scene — and it could’ve been anywhere.” Sometimes master shots would be the best place to begin, but just as often, a variety of options were “auditioned.” In covering a scene, Rudolph preferred not to repeat shots. “He wouldn’t do so many takes in one angle,” Elmiger observes. “He would keep changing the camera. A scene’s coverage would be somewhat disparate; it wouldn’t be over, over, medium, close.”

Once an opening shot was selected, Elmiger and Rudolph would tackle the rest of the scene. “He would say, ‘Well, you just need to cut when we’re sick of this shot or we want to be somewhere else,’” she explains. “We would get done with a particular shot and then we would say, ‘Okay, now what are we going to do?’” Especially challenging were complex scenes in which many characters congregated, often at parties or other gatherings. To add texture to such scenes, Rudolph photographed improvised dialogue exchanges between actors — even those in the background — and folded the resulting shots into the film. “Maybe Jane Adams and Rebecca Miller were having a conversation over there by the bookcase,” she says, offering an example of the sort of material that was available to her in the cutting room. “And Martha Plimpton and Matt Malloy were fighting in the hallway.”

The editor remembers an especially challenging scene showing an afternoon party on the lawn of a lavish estate, during which Ross is heard discussing his concept for The New Yorker and other characters are engaged in conversation or play. Because so much footage had been shot, the editor faced an abundance of choices. “There were a lot of shots,” she says. “People were at different parts of the estate. They were in different configurations at tables and getting up and wandering around. There were multiple storylines to keep going. Sometimes I would say, ‘Oh my God, how is this ever going to become coherent?’”

Furthermore, Rudolph’s coverage did not always match in a conventional manner. In some cases, the solution was found in the sound. “If a shot didn’t exactly go together where you might think it would, the sound would be the continuity,” Elmiger recalls. “There was a smoothness to it, but a lot of it was audio. The sound kept things flowing properly.”

Many of the scenes came with wild tracks that had been recorded without image. “Alan would turn off the camera, because it was shot on film and it wasn’t so cheap to keep the camera running all the time,” Elmiger says. “But he would be interested in keeping the sound running.” The editor was tasked with combining the tracks to create overlapping dialogue. “I would cut together selects and create different conversations that were off-screen and layer them in multiple audio tracks on the Avid,” she recounts. “So there would be a smooth, simultaneous conversation, but it wouldn’t sound like a mishmash.” No dialogue was recorded during post-production; “Alan and Bob both really hated ADR,” Elmiger adds. Mixing was done at the Saul Zaentz Film Center in Berkeley, California, with a crew led by supervising re-recording mixer Mark Berger, CAS, and re-recording mixer Michael Semanick, CAS.

From an initial cut that ran about three-and-a-half hours, the film was shortened to a little more than two hours over the course of a succession of screenings. “Alan and Bob had a whole group of people that they always invited, and the editing crew was always encouraged to invite our friends,” Elmiger recalls. “We didn’t fill out cards; there was none of that. Bob would always say that he didn’t care what anyone said, he just would feel it in the room.”

When Mrs. Parker and the Vicious Circle was released, critics enthused about its representation of a long-lost literary epoch. “Rudolph shoots the table from above,” wrote Roger Ebert in The Chicago Sun-Times, referring to the actual round table at the Algonquin, “and then his camera circles it, so we hear snatches of countless bon mots.” In The New York Times, Janet Maslin singled out the performance of Leigh (who went on to receive Golden Globe and Independent Spirit Award nominations for Best Actress): “Ms. Leigh has lately evolved from a promising young performer to an accomplished actress capable of dazzling surprises.”

The film also cemented Elmiger’s role in the Altman-Rudolph orbit for the duration of the decade. In 1994, she was again second editor with Peroni on Altman’s take on high fashion, Prêt-à-Porter (Ready to Wear). Further films with Rudolph also followed, with Elmiger editing Afterglow (1997), starring Julie Christie, and Breakfast of Champions (1999), from the novel by Kurt Vonnegut. And Mrs. Parker veterans Campbell Scott and Stanley Tucci sought out Elmiger to edit their directorial debut, Big Night (1996). She also edited two additional films directed by Tucci: The Imposters (1998) and Joe Gould’s Secret (2000). “It became kind of a rotation,” Elmiger says. “It was this wonderful time of going from one terrific director to the other.”

For the experience of making the film, and for the opportunities that sprang from it, the editor remains grateful for that fateful job interview at the Algonquin — and for the chances both Rudolph and Altman had taken on her.

“I hadn’t been to film school,” she reflects. “When it came to hiring people, for both of them, they didn’t choose people with the obvious kinds of experience. They just picked people with whom they clicked.”

About Peter Tonguette 71 Articles
Peter Tonguette is a freelance writer whose work has appeared in The New York Times, The Wall Street Journal, Sight & Sound, Film Comment and Cineaste. He can be reached at tonguetteauthor2@aol.com.

UNION MADE: When Bruce was Still Green: Bruce Green 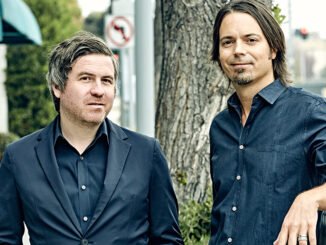 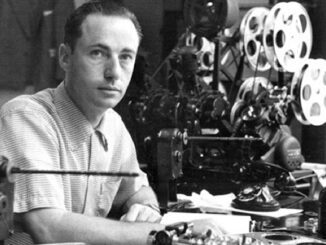