Creative editing of archival material, both sound and picture, can be great fun, a great challenge or both, depending on what material and what expectations a filmmaker brings to the editing room. Studying James Forsher’s new book, Stock Footage + Everything Under the Sun (due on shelves in January 2019) makes it highly likely that the challenge will be fun, and that the edit will produce a satisfying film. This compact and clearly written volume considers virtually every type of archival source likely to be used in media production, and offers practical approaches to finding, selecting and licensing it. 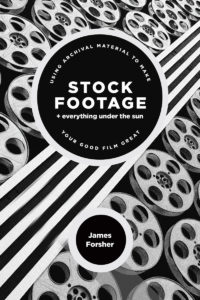 With this delightfully broad approach in mind, a filmmaker is freed from possible preconceived visions of grainy news film or old still photographs subjected to the “Ken Burns Effect.” The book is divided into four logical parts. Each of the 16 chapters in Part One, What to Look For is devoted to one type of archival resource; for example, short films, the Internet, recordings, artwork, radio, etc. The chapter then explains the type of medium under consideration, the years it was (is) in use, its audience and its potential copyright status.

An example from Part One is a consideration of animation, summarized in seven short pages encompassing the type of medium (film and digital), years in use (late 1890s-present), audience (worldwide), copyright status (pre-1920s, public domain; 1920s-1970s, mixture of public domain and copyrighted; post-1970s, copyrighted). Forsher then discusses early animation technologies, including trick photography and miniatures, cel animation, and sound and television — including commercial and the digital 2D and 3D universes. He ends with words of caution that although pre-television era films are often in public domain, famous characters such as Popeye or Betty Boop were exploited as brands and are therefore still protected for commercial use.

RELATED POSTS:  Who Were the True Auteurs in Post-Production? Ask the Monitor Man

Part Two takes the study further, explaining where stock materials are held. Among the seven categories listed is the invaluable The Most Affordable Sources of Archival Material. These may seem obvious to anyone who ever watched the credits of any film using archival material, but along with the well-known National Archive and Library of Congress, Forsher outlines the resources available at NASA, which includes much more than space shots, with films going back to the first manned flight of the Wright Brothers in 1903. These images at NASA are in the public domain. The collection also includes audio recordings and some computer files, along with other items available for non-commercial uses. As in most of his source referrals, the author provides detailed website addresses and telephone numbers, current as of publication.

One valuable section of the Most Affordable chapter is a set of highlighted advice tips from professional film researcher Bonnie Rowan. It is not only a plug for hiring an accomplished professional, but also warns of the pitfalls facing anyone seeking to access the myriad holdings in Washington, DC’s public institutions. While often rights-free, they are not accessible in user-friendly databases (even the Library of Congress has only a fraction of its resources databased), and ordering broadcast quality copies is generally confusing and time-consuming.

The profession of media archivist has come a very long way since private collectors guarded their secret vaults of 16mm and 35mm prints with passionate ferocity, but despite increasing access to collections, there is still no substitute for the first-hand experience of individuals who know what is where and who controls it. (Those interested in learning about the current state of moving image archiving should check out the website of the Association of Moving Image Archivists at https://amianet.org).

Forsher is himself the owner of an active commercial film archive with over 4,000 titles related to Americana and the entertainment industry. He thus knows well of what he writes in Part Three, How to License It. Here, he concisely explains the basics of copyright, public domain and fair use. These often misunderstood and misused laws and rules of the road require a more nuanced examination than Stock Footage can supply, but it is an excellent place to begin parsing their complexities.

Part Three also includes advice on how to clear rights, when to negotiate for material, and why every professional production needs Errors and Omissions Insurance. “Entertainment is a very litigious area,” he writes, following up with another understatement: “Most people who have spent years creating a project feel strongly about protecting their hard work. So do studios.”  Forsher plainly states that he is not offering legal advice.

Although not pointed out by the author, filmmakers seeking better understanding are well advised to refer to American University’s Center for Social Media Fair Use Guides (http://cmsimpact.org/codes-of-best-practices), the 2016 documentary film Other People’s Footage (www.otherpeoplesfootage.com) and/or a highly knowledgeable entertainment copyright attorney.

Lest the challenge of copyrighted material take away some of the fun of incorporating archival materials, Forsher points out that most of the tens of thousands of books written and illustrated before 1920 are in the public domain. There are also home movies and videos often copyright free. In fact, there are millions of sounds and images available for those willing to do the hard work of unearthing them. Near the end of the book, the author claims that filmmakers who learn in film schools “never hear about how archival assets make their show richer.” This may have once been true, but serious film schools today include study of archival material, and especially the concept of fair use, in the classroom.

RELATED POSTS:  A screenwriter walks into an edit suite...

This book itself can be an excellent primer for current film students. Raised on YouTube mash-ups, they accept repurposing of sound and image as second nature, and badly need guidance about appropriate use of archival resources. The book includes four suggested assignments and is a beautifully organized teaching tool. Michael Wiese Productions has steadily turned out reliable how-to film books for decades, and this new addition continues the tradition of readability and utilitarianism.

Forsher’s writing style is so free from adjectives that Stock Footage reads much like an instruction manual, albeit one dedicated to one of filmmaking’s most fascinating tools. Stock Footage + Everything Under the Sun is more than an essential filmmaking handbook; it offers fresh and creative approaches to accessing and legally using archival materials.

Stock Footage + Everything Under the Sun: Using Archival Material to Make Your Good Film Great

At my high school, admission to advanced placement (AP) classes was by invitation only. I tried four times to be admitted into AP English. The head of the department, a sour and exhausted woman named Ms. Gallagher, eventually told me, “I wouldn’t feel good about myself if I encouraged you to pursue something at which you won’t succeed.” […]

Editors: Do You Know Your Fabula from Your Syuzhet?

Post-production professionals are regularly asked why they select specific picture cuts or sound transitions. Those with successful careers know how to discuss, and sometimes defend, their choices in language that producers and directors understand quickly. […]

The Editor Strikes Back:
Cutting Remarks from the Cutting Room

With Movers and Shakers: The Monster Makers, long-time editor Tariq Anwar somehow manages to take time away from the bench to write an amusing book about his 30-year career in the film and television industries. The tone is sardonic, the writing straightforward, the many line drawings humorous. […]