The technical, artistic and economic tumult that roiled through Hollywood with the coming of sound sometimes led to wildly unusual experiments and partnerships. The widespread adoption of literary works and stage plays was one product of the beginning of the talkies. In Adaptations in the Sound Era 1927-37, Deborah Cartmell presents this phenomenon through innovative research and a non- judgmental eye, producing a book that is both scholarly and accessible to the general reader. Her exploration relies on not only the films and their sources – popular criticism from the era, box office figures and later reassessments – but also and primarily on analysis of original press kits, which in those days were better known as press books. This ballyhooing and purple-prosed primary evidence supports her ideas and her writing gives an authentic, occasionally amusing voice to a relatively lost period of film study.

As they brought in sound technologies and the experts who knew how to use them, the studios demanded visible (or audible) results from their investments, and audiences were, at least initially, captivated by Hollywood’s latest novelty. This meant words; and where better to find words than in the non- copyrighted writing of English literature’s classics? Such sources abounded and Cartmell categorizes her study of them into chapters on William Shakespeare, Charles Dickens, Gothic (Horror), Biopics and Films for Children, with an emphasis on the differences between pre- and post-Hays Code – the set of industry moral guidelines established by the Motion Picture Producers and Distributors of America (MPPDA) that was applied to most US films released by major studios from 1930 to 1968.

Literary adaptations were nothing new for the movies. Some of the very first experiments in filmmaking involved Shakespeare, and approximately 200 film versions of his plays had been made by 1914, mainly in Britain, France and the US. Silent film of course allowed Shakespeare’s hallowed English to be translated into intertitles of any language, but with sound, film could at last capture the poetry’s magic – at least theoretically. 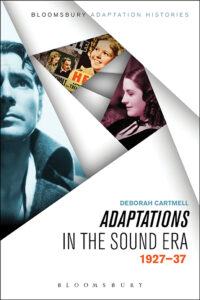 One of the era’s big unknowns was whether silent movie stars would be able to retain their box office power once given voices. Immortalized, if over-simplified in Singin’ in the Rain (1952), and more recently serving as the storyline for The Artist (2011), this very real problem was tackled head-on with Shakespeare by no less than Hollywood’s reigning couple: Mary Pickford and Douglas Fairbanks. They were paired in Taming of the Shrew (1929), directed by Sam Taylor, which was Hollywood’s first sound Shakespeare adaption.

The case study of this Shrew is representative of Cartmell’s meticulous approach. She notes, “This film marks an important point in the history of screen adaptation and in Shakespeare and screen studies.” Although released in both silent and sound versions, it was touted in publicity materials as “the first to bring Shakespeare to the screen,” apparently wiping out any trace of the entire silent Shakespearean oeuvre. It was actually not even the first attempt at a Shakespeare talkie. The earliest is a 1900 French version of Hamlet, starring Sarah Bernhardt as Hamlet, often cited as one of the first examples of sound and moving image synchronization created with the Phono-Cinema-Theatre system.

While the Shrew press materials take great pains to point out that Shakespeare’s original words are now available to the masses (“not one bit of the glorious Shakespearean dialogue has been sacrificed”), an even greater selling point is the debut screen pairing of real-life wife and husband Pickford and Fairbanks. Behind the scenes, their marriage was almost over, but, as Cartmell observes, the fan magazines were mad for “real-life” Hollywood romance, and so the film’s tagline declares, “The big three – Mary, Doug, and Bill,” the last being the Bard himself. The film was a box office flop and Pickford, somewhat embarrassed by her own performance, soon retired from acting to run United Artists.

Shrew‘s failure stopped Hollywood’s attempts to sell Shakespeare until 1935, when Warner Bros. risked Max Reinhardt’s opulent version of A Midsummer Night’s Dream, co-directed with his former pupil William Dieterle. Even with James Cagney in “The Greatest Role of His Career,” Dick Powell, who as Lysander “Sings His Way into Your Heart,” and, most famously, Mickey Rooney as Puck, among a cast of stars, the film did not find a popular audience. The soundmen, Charles David Forest (whose first credit was on the aforementioned Shrew) and Nathan Levinson (who had worked with Sam Warner to bring sound to the movies with 1927’s The Jazz Singer), received no screen credit. This film too failed to make much money. Cartmell argues that while Hollywood tried to position filmed Shakespeare plays as cultural opportunities for those who thought him too highbrow, early sound films did not succeed in this, and they generally served to alienate critics and the intelligentsia who revered the playwright.

RELATED POSTS:  Anaglyph for the Amateur: Do Try This at Home!

The author also provides fascinating tidbits about many seemingly absurd promotional suggestions, particularly with Dickens adaptations. The MGM pressbook for Charles Conway’s 1935 A Tale of Two Cities is typical in its suggestion, “Addressed especially to those theatres that cannot afford the expense of a Dickens float…” that they should employ people dressed as Dickens characters wearing sandwich boards in the shape of giant books featuring the movie’s posters as covers. These walking books should then be deployed to “school and college locations” to emphasize the film’s literary credentials. Cartmell also indicates that Dickens’ portrayals of Victorian poverty were appealing to poor Depression-era audiences and that his work was more “popular” than “classic.” Her research demonstrates that at least for the studios, these suppositions were true.

More success was found in the horror genre. Early sound adaptations of gothic novels, such as Mary Shelley’s Frankenstein (directed by James Whale), Bram Stoker’s Dracula (Tod Browning) and Robert Louis Stevenson’s Dr. Jekyll and Mr. Hyde (Reuben Mamoulian) – all from 1931 – continue today as classic films, themselves considered as source material to be referenced and parodied. Some of these films are also part of the halloween movies list that are cherished by movie lovers. Cartmell ascribes this timelessness to two factors: 1) the fact that they stressed the horror genre over the original writing, and 2) the filmmakers recognized and used the power of silence. She cites the brilliance of the three directors and their understanding of mise-en-scène, editing and careful use of sound. Cartmell’s analysis confirms that the marketing departments continued to stress original authors, but a poster shows that Universal’s “Carl Laemmle presents Dracula,” while Frankenstein is “A Chilling Thriller based on a Novel by Mary Wollstonecraft Shelley.” Cartmell notes that in the latter, silence replaces dialogue “…as the increasingly articulate monster of Mary Shelley’s tale becomes a mute in Whale’s film.”

RELATED POSTS:  DEDE’S DEVOTEES: Some Words from Her Admirers

The studios were still very much ready to claim legitimacy through literary heritage when it served their purpose. In responding to the pressures of the Hays Code, the MPPDA’s Head of the Studio Relations Committee apparently felt that Paramount could exploit Hyde’s horrors in Dr. Jekyll and Mr. Hyde “since it was built upon a literary classic.”

Cartmell also makes a case for the influence of the Code in creating the cycles of often-derided biopics, in which stars become conflated with historical personages. She focuses on The Private Life of Henry the VIII (1933) as playing on audiences’ prurient interest in “private lives” of movie stars. Charles Laughton’s Henry became a standard popular image of the king, while Elsa Lanchester (Laughton’s real-life wife) plays Henry’s fourth, Anne of Cleves.

In the later 1930s, when the Code was in full effect, advertising for adaptations of children’s films emphasized purity and morality. Shirley Temple vehicles such as John Ford’s version of Rudyard Kipling’s Wee Willie Winkie and Alan Dwan’s film of Johanna Spyri’s Heidi, (both 1937) relied on the child star’s innocent image. Heidi‘s pressbook unites the novel’s character with the star, “In the Beloved Story Millions Wanted Her to Make” and offered bookmarks with pictures of the novel surrounded by fan letters begging Temple to take on the role.

In Adaptations in the Sound Era, Cartmell provides fascinating tidbits about these and other seeming absurdities. Without overplaying obvious ironies, she investigates a little-studied area, wisely leaving it to readers to find their own enjoyment in the details.

About Betsy McLane 39 Articles
Betsy A. McLane is the author of A New History of Documentary Film: Second Edition. She served as the project director for the American Documentary Showcase, and was the executive director of the International Documentary Association. Contact her at betsy@documentarydiva.com.

The emergency lights flickered on and off. I found myself 30 feet in the air hanging onto the edge of a railing. […]

I remembered how the same footage in Brazil was used to portray extreme opposites of emotion, and realized I too could manipulate the footage shot in Reality to better reflect the story we needed to tell. […]