Editors note: The following is a member opinion. Members are welcome to submit opinions and letters to the editor to cinemontage@editorsguild.com. Opinions published by CineMontage are not necessarily the policy of the Editors Guild.
Update September 7: An earlier version of this article inadvertently omitted the word “annually” when discussing projections of hourly contributions.

Of course on Labor Day it’s time to honor the American worker. Yet our union has made a contract deal which doesn’t respect workers as they save for retirement. Instead of relying on hard work, it bets the farm — both our pension and our healthcare — on optimistic luck of the stock market.

Has trade unionism come to rely on corporate traders?

This is disappointing for a major American union that represents 43,000 film and television production and post-production workers in the 13 locals of its Hollywood Bargaining Unit in a tentative deal between the International Alliance of Theatrical Stage Employees (IATSE) — of which the Editors Guild is the ever post proud Local 700 and the Loyal Opposition — and the Alliance of Motion Picture and Television Producers (AMPTP), collectively “the producers.”

Union members are debating the deal in person and on social media as they should.  This is what collective bargaining looks like. Members who care about their retirement should pay attention and vote. Ballots will be mailed in the coming weeks.

Online discussion encourages members to quickly share information about their union. An IATSE member of another local (not a member of Local 700!) posted a leaked copy of a letter from an actuary at the Motion Picture Industry Pension and Health Plan (MPIHP) in the 2018 IATSE Contract Forum on Facebook. This amazing discussion forum is what virtual collective bargaining looks like.  So to make a clear disclaimer: this information is already online here.

In the letter addressed to the MPI Trustees, and shared with union members, the actuary was crunching the numbers and projected that the pension plan — currently funded at 66.3%, a point above critical status! — would take five years to get to the so-called “green zone” of near 80% funded, and 14 years to get to full funding.

At first glance, union members could think the letter an argument in favor of a “Yes” vote. After all, it says the pension would be funded eventually, right?  But in 14 years? 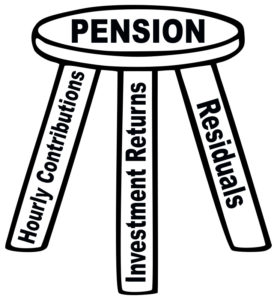 On closer look, the letter makes such rosy predictions that it should make a reasonable union voter concerned. One member called the letter “the smoking gun” of this inadequate deal.

The letter and actuarial table projects revenue from the three sources that fund the union pension plan: hourly contributions, residuals and investments.

The actuary explains that in order for the plan to be funded in 14 years, all three of these projections must be precisely met. So, just as there are three legs to support a stool, these three revenue sources must fund the plan.

But what happens if one of the legs fails? Let’s talk about each source, or each leg of funding.

This is the one part of the deal that relies on actual hard work. It presumes that union members will be working longer and harder at their jobs (in other articles, CineMontage discussed the weak provisions for safe hours in this deal). For each hour worked on a union show, the producers contribute into the health and pension plan on their behalf. The projections of the MPI  expect 92.5 million hours to flow into the plan annually over the three-year life of the contract. This was raised during the negotiations from a more conservative 87.5 million hours.

If we need to rely on the hard work of members, we should have confidence that we will achieve this increased amount of hours, and maybe even more.

So leg one? Check.

The producers agreed to increase the hourly contributions for the health plan. Thus the IA negotiators thought to ask for an increase in the hourly pension rate as well. Local 700’s National Executive Director Cathy Repola reported to the Board of Directors that, for months leading up to negotiations, the IA included a pension rate increase in the draft proposals. But just prior to commencing the negotiations, the proposal was dropped in favor of fighting to get the extra pension funding from residuals. And did they achieve this goal?  Well let’s look at the next leg.

Residuals are pooled into the pension plan and shared by all union members.  This includes previously existing residuals from so-called new media, as well as traditional residuals from so-called “Post ’60s” (motion pictures distributed via free television) and supplemental markets (sale of features on DVDs). We all know these old-fashioned markets are trending downward in the days of new technology and streaming. Yet without explanation, the MPI actuary projects that they will remain as reliable funding sources for the next 14 years.

This leads any responsible union member to ask: Are we really going to get money from DVD sales until 2032? Or is the larger question: Will the newly negotiated new media residuals in this deal be enough to offset the old-fashioned lost markets?

The IA negotiators set out to achieve the same deal that the other Guilds got. The writers and directors all received adequate new residual funding sources from new media. But the IA fell short and ended up with a completely different structure.

So much for pattern bargaining. What a sweet deal for the producers! This deal telegraphs that retirement security of so-called “below-the-line” workers is not the same as “above-the-line.” IA members will only receive new media residuals on features released theatrically and streamed, with limiting qualifiers and loopholes on film length and budget.  And we get no reuse residual on foreign distribution.

So will this be enough money to fund our pension? No one can know for certain if this newly negotiated residual stream will generate enough income to offset the other declining revenue from markets that are phasing out with technology.

Now we come to the final leg of the stool — the leg most out of our control as union members. No matter how hard IATSE members work to construct a set, decorate it, light the actors, put them in wardrobe, hair and makeup, roll camera and sound, edit their best performance, mix the final soundtrack and color the picture, none of this hard work matters in this final projection. As we will see in Leg 3, this deal gambles the security of our retirement on presuming the stock market does really well.

If you read the letter from the MPI actuary (again, this has been leaked online), there is a critical sentence that stands out like a jarring edit transition. It reads as follows: “Assuming that the current market return assumption of 7.5% [net of investment expenses] is achieved in each future year, the attached projection shows that the plan is scheduled to reach 80% funding by January 1, 2023 and 100% funding as of January 1, 2032…”

Notice these key words: In. Each. Future. Year. We must get 7.5% net — not gross — return on investment for the next 14 years, or five years to get to the so-called “green zone,” where the plan would be healthy. These words should make any responsible, voting union member take caution. Market analysts say that 7.5% is a high bar to hit. According to Vanguard, the asset management firm, the 10-year outlook for United States stocks was dropped from 8% to 3.9% in 2013.

Market analysts say to expect a conservative ROI projection of 3.9%, and the IATSE negotiations are projecting an ROI of 7.5%. The smoking gun! 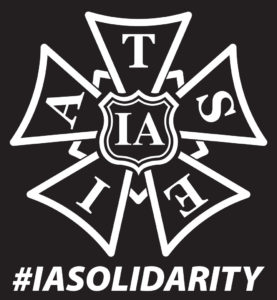 To review the funding legs: One is strong — the leg that relies on the hard work of union members. Another leg is uncertain, but we hope it supports its weight. The third leg would be the one the could most likely give way.

On this Labor Day, hard-working union members should consider these concerns. They should not be intimidated from asking hard questions about the merits of the deal. Asking questions promotes union strength and solidarity. Voting on ratification is about our retirement and not about the personality of IA leaders or negotiators.

It’s also about our health-care services. The producers have a legal obligation to fund the pension and insure our minimum funding requirements. The pension cannot drop any lower than 65% or it will be under review by the Pension Protection Act. If there isn’t enough money in the pension plan to remain funded, money would have to be diverted from the health plan. Our robust union health insurance then would take the financial hit. That could mean having to negotiate next time over fewer services, higher co-pays, etc.

The pension plan may hang in there for the next three years of the life of this contract. But what about a realistic long-term solution to save the union pension? We should demand this solution be addressed now and not in a future negotiation.  Let’s tell the producers greed works both ways —  rising profits should raise benefits for workers.

Hard-working union members deserve a secure retirement and should vote “No” on ratification.

About A.J. Catoline 31 Articles
A.J. Catoline is a graduate of NYU's Tisch School of the Arts and USC's Master of Professional Writing Program, and a Board Member of the Motion Picture Editors Guild, IATSE, Chairman of the MPEG Publications Committee. He is a picture editor working in Los Angeles, recently on "Ted Lasso" for Apple TV+. He can be reached at ajcatoline@gmail.com

Senator Patty Murray (Washington) and Representative Bobby Scott (Virginia) have introduced the Protecting the Right to Organize Act, which restores the right of workers to freely and fairly form a union and bargain together for changes […]

The Tax Fairness for Workers Act would also restore the deduction for other unreimbursed employee expenses, including travel and the cost of tools and uniforms, that were killed in the 2017 package of tax breaks for the rich. The bill […]

Our nation and our union are currently roiling in the pro-or-con debate of upcoming elections. For the country, it’s the biennial mid-term elections of our congressional representatives and senators as well as state officials in early November, which looks to be more divisive than ever. […]