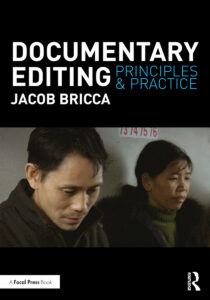 Jacob Bricca’s book on editing documentary film is a how-to that is firmly lodged in the digital technology of 2018. While new in many ways, it employs basic editing logic and draws on timeless, as well as current, examples to illustrate editing skills. Most of the films discussed originated in the US and were produced after 1990, but some, such as Drew Associates’ Primary (1960), are over 50 years old.

Documentary Editing is obviously concerned only with non-fiction, and covers both picture and sound techniques. More specifically, it deals with editing feature-length independent documentaries of the kind screened at film festivals, in theatres, on PBS and now through streaming video outlets. The focus is on one-off passion projects, which for decades were made outside the entertainment industry system. The demands of post-production for a weekly broadcast or ongoing cable series such as National Geographic Explorer or Biography are not considered.

The definition of documentary used here is specifically limited. The subject matter of the example films ranges from political to personal to process to poetry, but they hew to a standard feature-length structure of between 40 and 110 minutes. Editing reality shows, news, short form, nature shows and experimental video is not the focus of this book. The trendy multi-part documentary series format, now evolving rapidly, is considered here in The Keepers (2017), but it’s too fresh to be more than briefly mentioned. Bricca concentrates on vérité-style filmmaking, with limited discussion of historical, compilation or instructional documentary editing parameters. Music and lower-third subtitling are discussed, but mention of narration is limited almost exclusively to first-person commentary, such as that in An Inconvenient Truth (2006) or Super-Size Me (2004).

Documentary Editing is a solid and useful manual designed for those who have not worked extensively with the massive amounts of footage generated by vérité filmmaking, especially the many thousands of hours spawned by digital vérité shooting. Bricca is an assistant professor at the University of Arizona’s School of Theatre, Film and Television, and has editing credits on Lost in La Mancha (2002) and The Bad Kids (with Mary Lampson, 2016), among others.

Publishers Focal Press/Taylor and Francis, under the imprint of Routledge, are known for their classroom-friendly texts, and this book works well for instructors searching for an organized way to teach documentary editing. Its 18 chapters can easily be adapted for college term schedules, or used as a guide by an editor moving independently through a single production. Its logical organization begins with “Setting the Stage for a Successful Edit,” which includes the perhaps wishful plan of allowing downtime for reflective breaks from the material. This may be more feasible in an academic or completely independent setting than in Hollywood.

Frederick Wiseman, whose films Bricca cites as exemplifying an alternative approach to narrative development, often takes over a year working full-time to edit his films. Wiseman looks at and thinks about the hundreds of hours he and his cameraman shot, without personally touching a button or key. Few commercial productions can afford such luxury, although a six-to-nine-month editing schedule is not unusual for the type of film Bricca explores.

Geoffrey Richman, ACE, whose credits include Murderball (2005), Sicko (2007) and The Cove (2009), reports, “Once you get six months into the edit and you see the clock starting to run out, it can be really frustrating because you have the sense that things are going to move at the same pace — but that’s not true at all. For me, I find on every film that the final weeks of the edit are exponentially more productive than anything that came before.”

Bricca moves on to issues such as “Finding Patterns” and “Constructing and Refining Scenes” through “Building a Rough Cut” to “Fine Cut, Final Cut and Beyond.” Within these and other sections he cites several experienced documentary editors whose advice is dotted throughout the book. Richman speaks from experience: “How well you organize and think about your select reels absolutely determines how well the edit is going to go. If you don’t organize your select reels, you’ll get to your first cut faster, but it’s a waste of time because the select reel is how you create the 1,000 cuts that come after.”

Others quoted include Mary Lampson, Kate Amend, ACE, Kim Roberts, ACE, Aaron Wickenden, ACE, and twice-Academy-Award-nominated (Documentary Features Street Fight, 2005; If a Tree Falls: A Story of the Earth Liberation Front, 2011) director/editor Marshall Curry. Honing in on the details of pacing, Curry says, “Sometimes a breath is really nice and keeps the pacing natural and real. But sometimes a breath is just a breath and it can be removed. I look for places where I can pull out six frames, or even two frames.”

The book’s diagrams and computer screenshots assume that those using it have access to Avid Media Composer or Adobe Premiere Pro, although this is not a manufacturers’ guide on how to operate equipment. As is most often (and most unfortunately) the case with Focal Press, the quality of the printed images is disappointingly poor, making many of the visual examples frustrating. A list of eight types of raw footage — from formal interviews to re-enactments, along with the advantages and disadvantages of using each — is rendered in such small type as to be virtually useless on the printed page. The same is true of tiny diagrams of story arcs for The World According to Sesame Street (2006) and The Hunting Ground (2015). Perhaps the e-book version or accompanying website offers better images.

In addition to very detailed practical notes, Documentary Editing fulfills the promise of its title, discussing principles as well as practice. Bricca quotes scholar Bill Nichols for doses of documentary theory, citing Nichol’s definition of “evidentiary editing” as the type used by Ken Burns. Bricca also acknowledges the special ethical questions particular to documentary (although these are not necessarily editorial decisions), such as the validity of re-enactments; he notes that controversy about such staging goes back to at least 1922 and Nanook of the North. The author also offers advice on surviving the emotional rigors of test screenings and deferring to a director’s wishes.

This book assumes that readers possess more than a passing knowledge of contemporary documentary films as well as some background in documentary film history. The working editors who are quoted have decades of experience among them. Bricca writes clearly and offers an orderly roadmap for any editor challenged by the complex process of putting an independent documentary maker’s vision on the screen.

A group of Editors discuss what makes good editing […]

Dede Allen discusses some of the new pressures that have affected editors, the increasing use of editors as film doctors and the changing hierarchy of the cutting room for assistants. […]

The universe of the USS Enterprise was alive with sound, Much of that was due to the singular vision of writer/producer Gene Roddenberry, along with the inventiveness of Douglas H. Grindstaff, who served as the show’s supervising sound effects editor for the entire 80-episode run. […]

On Saturday, August 20th at 1PM PST, get an insigh

On Friday we celebrated Union Night at the #Dodger

@outfest LA x MPEG Editors Reception was a hit! So

We congratulate all of our talented @mpeg700 Emmy

#Local700 has been securing wages, benefits and sa

Pride, protest and passion echoed through the hall